MINI is serious about marketing the all electric MINI Cooper S E as a hot hatch. To do that MINI’s first bit of official marketing is a MCSE towing a giant Boeing 777 at the Frankfurt Airport. A fun stunt but if you want real info on the 2020 Mini Cooper S E you’ll want to check out yesterday’s exclusive report that goes into technical detail and gives us our first look at pricing. 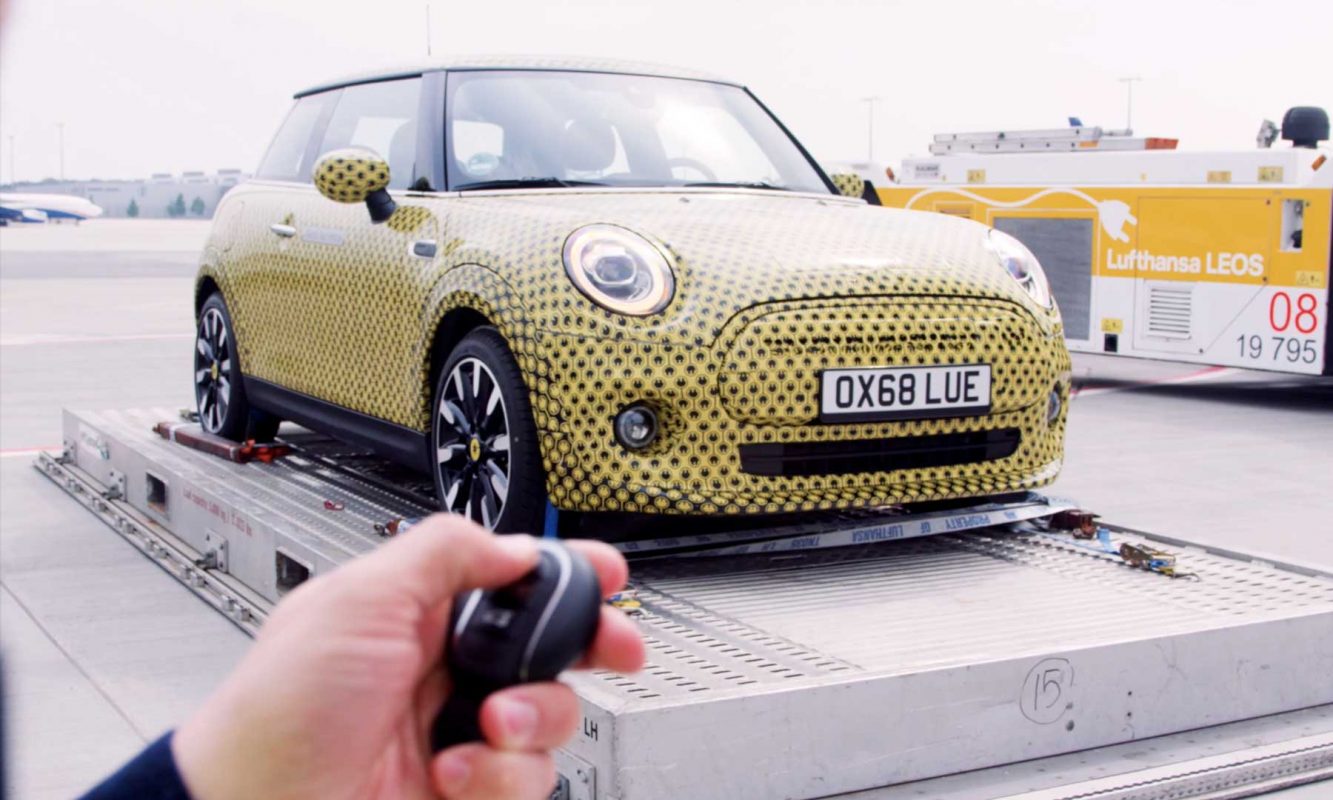 Official Release: Can the MINI Cooper S E Tow a 777?

Noiseless, emissions-free but very powerful: the MINI Electric will soon enrich the experience of locally emissions-free mobility with the addition of unique driving fun and the individual flair that is so typical of the British premium brand. The recent “testing programme” for the first purely electrically powered MINI was equally unconventional: on a foray to Frankfurt airport, a close-to-series prototype of the new model demonstrated just what electromobility in the style of MINI is capable of setting in motion. The MINI Cooper SE slipped straight into the role of an aircraft tug, setting off to the loading point towing a Boeing 777F freight aircraft with an unladen weight of some 150 tons. The unusual hook-up was filmed in a video clip. Created collaboratively by the BMW Group and Lufthansa Cargo, the 45-second commercial shows the MINI Cooper SE as a “muscle car” pulling the significantly larger and heavier transport aircraft across the airfield. The clip marks the start of a number of social media videos portraying the MINI Cooper SE in an exciting and entertaining manner. The videos, which will be published in the lead up to its market introduction, will link various topics of the BMW Group to be brought together.”

The MINI Cooper SE will go into serial production at the British plant in Oxford as of November 2019. It is based on the MINI 3 door and combines locally emissions-free driving with the brand’s characteristic go-kart feeling, premium quality and expressive design. As such, the MINI Electric offers a new type of sustainable mobility defined by driving fun and individuality, reflecting consistent implementation of the BMW Group’s electrification strategy. After the BMW i3 it is the second purely electrically powered model within the company’s premium automobile portfolio. Having been the epitome of thrilling mobility in the urban environment for 60 years, the MINI brand will in future combine locally emissions-free driving in city traffic with a unique emotional experience. In this way, the MINI Electric will be a driving force for future drive technology. Helping the MINI Cooper SE perform its muscle car role, the performance characteristics of the electric motor combine spontaneous power delivery with a high level of torque available directly from standing. The ongoing expansion of the range of vehicles with electrified drive across its various brands and segments is one of the key areas via which the BMW Group is shaping the mobility of the future based on its corporate strategy NUMBER ONE > NEXT.

With its spectacular show of strength at Frankfurt airport, the MINI Cooper SE prototype hooked up with an aircraft that already had an important role to play in the presentation of innovative BMW Group vehicle and technology concepts several months ago. Last September, the long-haul transport aircraft provided the setting for a rather special vehicle showcase – namely that of the BMW Vision iNEXT World Flight. Over a period of five days, media representatives were given the opportunity to view the BMW Group’s latest vision vehicle at the five venues in Munich, New York, San Francisco and Peking. In preparation for this, Lufthansa Cargo and BMW Group trade fair construction specialists converted the most efficient freight aircraft of its class into an exclusive, airworthy presentation platform for the BMW Vision iNEXT. This vision vehicle stands as a symbol for the BMW Group’s pool of future technologies and innovations that is used for all the company’s brands. The serial production vehicle model based on the vision model will be produced at the BMW Group plant in Dingolfing from 2021 onwards as the latest BMW Group technology flagship, featuring numerous innovations from the future-oriented areas of D-ACES (Design – Automated Driving, Connectivity, Electrification and Services).

Jim McDowell talks about the Clubman

MINI Launches the Cooper SD in Europe and the UK