Official Release: The X-raid Team is well prepared for the toughest rally in the world as it lines up with five crews at the 2012 Dakar. The ten men are all old hands who have already proven themselves at this level.

Left to right: Nani Roma, Stéphane Peterhansel, Krzysztof Holowczyc, Leonid Novitskiy and Ricardo Leal dos Santos
The time on the clock ultimately determines who wins the Rally Dakar. However, speed is not the only thing that counts on the individual stages leading up to the final time check. Teamwork between the driver and his co-driver is required on the difficult stages that make up the 8000 kilometers plus route – and experience. The ability to read the diverse route and to react to any obstacles without losing time is just as important as speed itself. 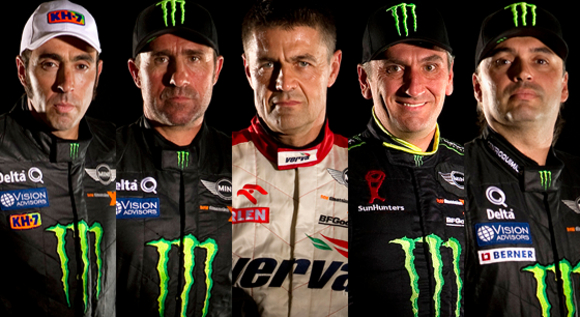 Left to right: Michel Perin, Jean-Paul Cottret, Jean-Marc Fortin, Andreas Schaulz, and Paulo Fiuza
When it comes to experience, nobody in the X-raid Team has amassed more Dakar know-how than Stéphane Peterhansel, whose nine overall wins at the Dakar make him the undisputed number one in the X-raid Team. No other driver has won the Rally Dakar more than him.

“Mister Dakar” as number one.

“Stéphane is obviously our spearhead,” says Team Manager Sven Quandt. He is referring to the 46-year-old who won the Dakar for the first time back in 1991 on a motorbike. Five more victories were to follow on two wheels. Having switched to four wheels, Peterhansel proceeded to leave the opposition in his wake on a further three occasions – the last of which came in 2007. “Mister Dakar” is now hungry for his tenth win and has again joined forces with his long-term co-driver Jean-Paul Cottret as he sets out on this quest.

Excellent performances in 2011 have already shown that Peterhansel has a good chance of claiming overall victory in January. Having finished fourth at last year’s Dakar, he switched to the MINI ALL4 Racing and promptly won the Abu Dhabi Desert Challenge in April. He then finished second at the Silk Way Rally in Russia in July. At the Baja Poland in September, Peterhansel once again finished in the runner-up spot.

However, Peterhansel’s team-mates have also caught the eye over the last twelve months. Here is how Krzysztof Holowczyc, Leonid Novitskiy, Nani Roma and Ricardo Leal dos Santos faired in 2011:

Krzysztof Holowczyc, alongside his co-driver Jean-Marc Fortin, lines up at his seventh
Rally Dakar, making him the number two in the X-raid Team. He underlined his title credentials with fifth place at the 2011 Dakar, followed by wins in Russia and Poland.

Experience is also the trump card for Holowczyc. He was crowned Polish rally champion in 1995, 1996 and 1999, and secured the title of European Rally Champion in 1997. The Pole is now looking to take the next step forward in his career and challenge for the Dakar crown at the wheel of the MINI ALL4 Racing.

Roma ahead of Novitskiy.

Also on the rise are Leonid Novitskiy and his German co-driver Andi Schulz. His many years of experience in the field of off-road driving came to the fore in 2010 and 2011 when he won the FIA World Cup for Cross Country Rallies. However, Novitskiy is still ranked behind Nani Roma, who already has an overall victory at the Dakar to his name and ranks third on the X-raid Team. In 2005 he was the fastest man at the Dakar Rally on a motorbike. Roma and his co-driver Michel Périn will also be competing in a MINI ALL4 Racing at the 2012 Dakar.

After finishing seventh at the 2011 Dakar, Ricardo Leal dos Santos and co-driver Paulo Fiuza are also looking to challenge in 2012. However, he is currently ranked behind team-mates Roma and Novitskiy.

Only MINI can do.

To ensure that everyone pulls together in South America, Team Manager Quandt recently called the squad together for a training camp in Seefeld, Austria. Here, the finishing touches were applied ahead of the start of the Dakar on 1st January. Similar to the cycling teams at the Tour de France, the Dakar also features stage specialists and water carriers, whose jobs are to make life easier for the title favorites.

These roles have now been assigned within the X-raid Team, and all that remains for fans now is to keep track of the different driving crews. The X-raid Team has also taken care of this potentially tricky challenge. In keeping with the motto “only MINI can do”, the X-raid Team will have a colorful outing at the Dakar. So, here is what to look out for: Stéphane Peterhansel is driving the toxic green MINI ALL4 Racing, while Novitskiy is in orange. Roma is behind the wheel of the yellow MINI ALL4 Racing and dos Santos is in the red car. Holowczyc starts in the colors of its main sponsor.

Anyone still struggling need only keep an eye out for the four magical letters in the winged circle: MINI – and there are five of them to spot.