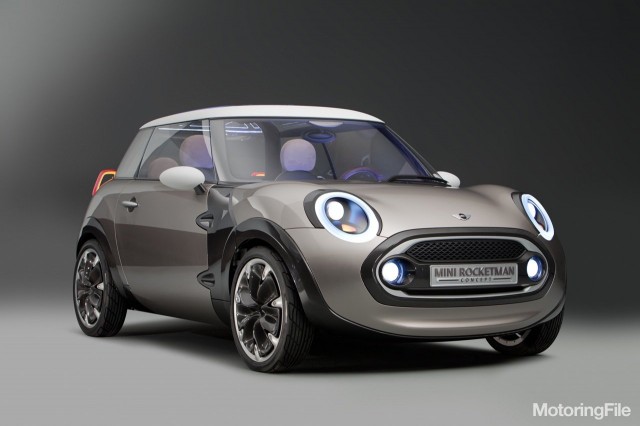 What does MINI Head of Design Anders Warming want for Christmas? A production version of the MINI Rocketman concept for one thing. Warming told members of the UK Press Corp that the Rocketman was, “a clear leap forwards,” and a car to “claim the true heritage of the brand” at the annual press dinner — this year about the new Roadster and other models. Warming went on to say “The Rocketman and Roadster are part of an ongoing dialogue with customers that asks, ‘What can we do with Mini?’ It’s about making authentic movements and developing a relevant bandwidth for the brand.”

Does that mean a production Rocketman is in the works? That remains to be seen. As much as we’d love to see it come to light, there’s a lot of conflicting information out there and our sources keep pointing toward no. But is Anders’ continuing narrative about the Rocketman a sign of future production consideration? We certainly hope so. In his remarks, Warming talked about “bandwidth” — about the breadth of MINI’s product offerings and its expansion into other segments. The guiding concept is that MINI’s “always the smallest car in the segment, has lightweight engineering and engines that are class-leading in terms of efficiency.” Then going on to reaffirm MINI’s focus, Warming reiterated that the regular MINI hardtop will “remain at the center of the brand.”

There are a number of key challenges to bringing a car like the Rocketman to production. Its all carbon fiber chassis for one. A car like this, if it did come to market, would also be at a significant premium. Would MINI buyers be willing to shell out the cash on such a small car just to exercise their ideals of how small a MINI “ought” to be? While our sources say we can expect to see design elements such as the “halo” headlight rings in the next generation MINI Hardtop (the F56), that’s a long way from seeing this stellar little concept in the cf flesh. Maybe if we’re all really good next year Anders’ Christmas wish will come true.