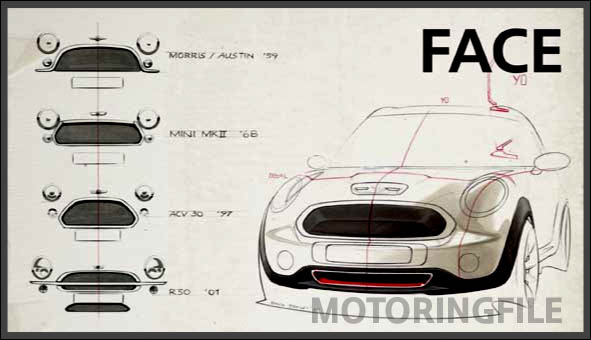 Earlier this week MINI USA released the first piece of it’s new “Covert” advertising that speaks directly to current MINI owners. An email was sent out to owners that gave them a URL (through the help of decoder glasses sent to all US MINI owners) that then lead to a super secret site full of interviews, and behind the scenes images from all parts of MINI. It’s definitely a mist for any owner or fan of the MINI.

One of the more notable parts of the experience is an image (above) that depicts what looks to be a refined version of the Clubman front facia. Knowing that the R56 Hatch, R55 Clubman and R57 Convertible are due for a refresh in the middle of next year we couldn’t help but put two and two together when we saw this image.

So is this a sneak peek at the mid life-cycle refresh that will affect the hatch, Clubman and convertible? It’s of course hard to say but it certainly looks like the kind of refinement that we’ve been told to expect for the 2011 model year. As we’ve reported we expect a new front and rear bumper, new lights all around (headlights should remain the same shape) and potentially a subtly different hood.

The other potential answer is that MINI is giving us a sneak peak at the new MINI crossover likely named the Countryman. The look is more aggressive with seemingly high ground clearance and a taller roof. We should know in just a few months with the crossover debuts at Detroit in January and the refresh debuts in Geneva in March.

Look for more MINI “covert” advertising and more surprises popping up later this year and next. And for more on the 2011 MINI refresh make sure to read our exclusive report published earlier this summer.