Friday we gave you part one of our interview with MINI Product manager Vinnie Kung. If you missed it, do yourself a huge favor and scroll down the page and start reading. For those interested in the R60 and MINI has a whole it’s a fascinating conversation with loads of new information we won’t get anywhere else.

MotoringFile: What does the Countryman mean for the Clubman? It would seem the two are very close in size overall.

Vinnie Kung:There is more of a size difference than what the pictures convey. The Countryman is focused on people with greater space and comfort needs while the Clubman will remain as the perfect choice for those that want something funky, cool and just as nimble as the Hardtop. In essence, both can live side by side as they still have the style and handling that we expect from a MINI. But it probably wonâ€™t be this way for too long.

Q: Will the Countryman form the basis of any other models such as a lower four door MINI (sans the crossover height) or a beachcomber type of vehicle?

VK: The Countryman is R60 and we have plenty of numbers to use until R69. MF: For enough. Ok let’s talk R60 specifications for a minute. What is the maximum wheel/tire combo MINI will sell at the dealer?

VK: Well, we have typically offered accessory wheels that are one inch larger than the biggest factory offering. So, if 17s are standard and 18s are optional…

MF: Are there any plans for a spare in any model?

VK: We wanted this from the beginning, but due to rear-impact crash standards and the lack of available space to make it all work, we were unable to get a spare tire. Because we wanted an extra margin of safety, we added runflat tires for free (a pricing battle that we won.)

MF: Are there any chances of a diesel power Countryman coming to the US?

VK: This scenario is the same as the one we have for all of todayâ€™s MINI Diesels. Weâ€™ve tried to make the business case work for the R60 as well, but it is incredibly negative because of the staggering costs to convert the European market Cooper D or One Diesel (even the new BMW Diesel engine) to 50 State specification. While the SCR technology isnâ€™t too bad, the necessary rework for the stampings means the body-in-white is affected and once you touch that, itâ€™s big bucks. It would have been over $10,000 more per car and while weâ€™re not always the brightest bulbs in the closet, we knew that it would not succeed at that price premium. MF: Ok, a few easier ones. There’s been a lot made about the Countryman being the largest MINI. But what does that mean in terms of cargo. In the release it was mentioned that it has 41 cubic feet with the seats folded down. How wide is this space? Are there any accessories planned for this area to accommodate bikes etc?

VK: The size increase for the Countryman is mostly found in the interior. We donâ€™t have final specs yet, but unlike some of our competitors, we will not have those two annoying humps that intrude on the rear cargo area from the shock towers. Because our multi-link rear suspension is so compact, we will have a very open and wide loading area.

MF: Is MINI considering a towing package for the R60?

VK: The platform is designed to accommodate towing in Europe but for the US, because of the requirements by the DOT for crash testing everything we sell from a production level, we will not have a hitch system available from the factory. This is why a dealer-installed setup is our best alternative, but this also requires certification so it will not be available from the start. VK: The two vehicles lines are very different, so not much carries over. However, some elements that weâ€™ve seen in the Roadster and Coupe concepts may make it to our upcoming update.

MF: What type of new colors can we expect with the R60? Any carry-overs from the current line?

VK: We get all-new colors because the paint system in Graz is completely different than that of the Oxford plant. So, we will get all new mixes and all new names

MF: Any chance of getting a 3 seat bench option in the US at some point? We understand there are US regulations are the issue at hand but would MINI considering selling the option through dealers?

VK:There is no plan to have the three-seater rear due to US requirements for vehicles our size. Because a rear-seat retrofit requires seatbelt changes, this modifies the carâ€™s safety standard that is acknowledged by the US DOT. So, we will not have it available for retrofit.

MF: A lot of thought seems to be going into the rail system. Are you planning on bringing this to the rest of the Mini line? 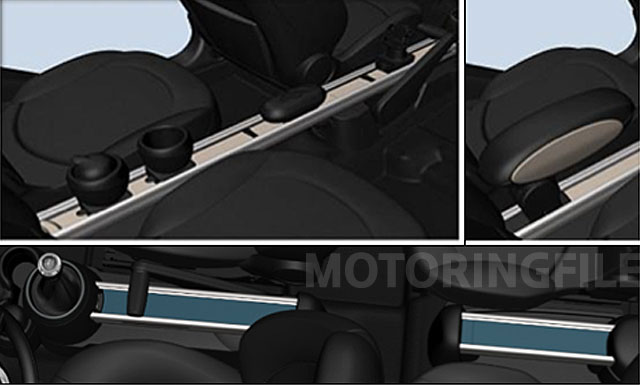 VK:The R60 platform benefits from having the widest and tallest MINI interior, so a Center Rail makes sense. If this concept were to be put into an R5x, it would compromise the existing interior space quite a bit, so it didnâ€™t make sense for us to bring it there. The one-piece rail will be standard in the US with a rear armrest optional. The two piece center rail is planned to be a no cost option for those of us with little ones.

MF: We reported a few weeks back that MINI cannot use Countryman in all markets due to naming rights issues. Any idea what those markets are and what the R60 will be called there

VK: Itâ€™s only in Japan where we find a different name being used. There, a small conversion company creates special versions of the R55 and calls them Countryman. Basically, they wanted a lot of money for us to use it so we said Sayonara to the problem and went with â€œMINI Crossoverâ€ there while Countryman is used everywhere else.

And with that we also say also sayonara. Thanks Vinnie!