MINI is embracing their past not only with new models and naming conventions but with the models themselves. MINI will be trotting out numerous variants everyone’s small car this year at the Techno Classica. Arguable the world’s greatest classic car show, the Techno Classica takes place in Essen Germany and bring in around 170,000 people from almost 40 countries.

This year MINI will be showing off the brand like never before with el from various MINI (and Mini) clubs around the world.

Official Release: For many years MINI has been a firm fixture in Hall 12 of Techno Classica. This attendance record has been underpinned by the various MINI Clubs and the exceptional cars which make up their collections. This year the British brand will be showing off the numerous variants of a small car whose history now stretches back 50 years.

Just five months after the debut of the original Mini, the first alternative body variant of the car was unveiled in January 1960. The 3,050-millimetre body of the original model was stretched to 3,300 mm to make the Mini Van. At its highest point, the small, two-seater panel van stood 10 mm taller than its sibling. There were no technical problems â€“ and therefore little cost â€“ involved in extending the wheelbase of the front-wheel-drive baseline Mini by 10 centimetres, to 213 cm. The load compartment had no windows, but glass was fitted in each of the two rear doors. The C-pillar, moved further back for the Van, was sloping, which meant that the two rear doors opened out at a similar angle through just over 90 degrees. The Mini Van quickly built up considerable popularity among tradespeople and the Post Office in Britain. Indeed, its extremely compact dimensions yet generous load capacity made it perfect for transporting loads from A to B â€“ even through the narrow alleyways of old towns. Over half a million new owners took delivery of a Mini Van during its time in production. Two other variants with the same technical underpinnings followed at short intervals: the Estate and the Pick-up. The small, four-seater Estate shared the same dimensions as the Van, but came with windows all round. The glass in both the rear doors and the rear side windows had a sliding opening mechanism. The Estate was badged as either the Countryman or the Traveller, depending on the brand, both names giving a clear hint as to its target group. The car was intended to appeal primarily to the rural population â€“ publicity photos featured animals being carried in the load area â€“ as well as young families keen to go on trips and tradespeople. The Morris Minor Traveller launched in 1953 had catered for this customer segment most effectively, and the Mini offered a taste of the Minorâ€™s legendary â€œwoodyâ€ style by mimicking its â€œhalf-timberedâ€ look from the B-pillar back. While the wood had a load-bearing function on the Morris Minor, it was added purely for decorative effect on the Mini. From 1961 the Estate was also available sans wood panelling, before the Mini Clubman eventually sounded the death knell for the wood-clad Mini Estate in 1969. From this point on, the Estate was only available with the Clubman moniker, sales of the cargo-lugging Mini having long since spread beyond its traditional countryside heartland; by now its following had swollen to over 400,000 admirers. The introduction of the Mini Pick-up in January 1961 was welcomed by those with more rugged usage requirements. This redoubtable workhorse â€“ of which 60,000 units were produced â€“ had an open load area behind its broader B-pillars, which were designed to enhance body rigidity. The load bay could be accessed from the rear via a bottom-hinged tailboard. The protective cargo cover, which was buttoned on from the side (as on a truck), had a flap at the rear (also with button attachment) with a window. 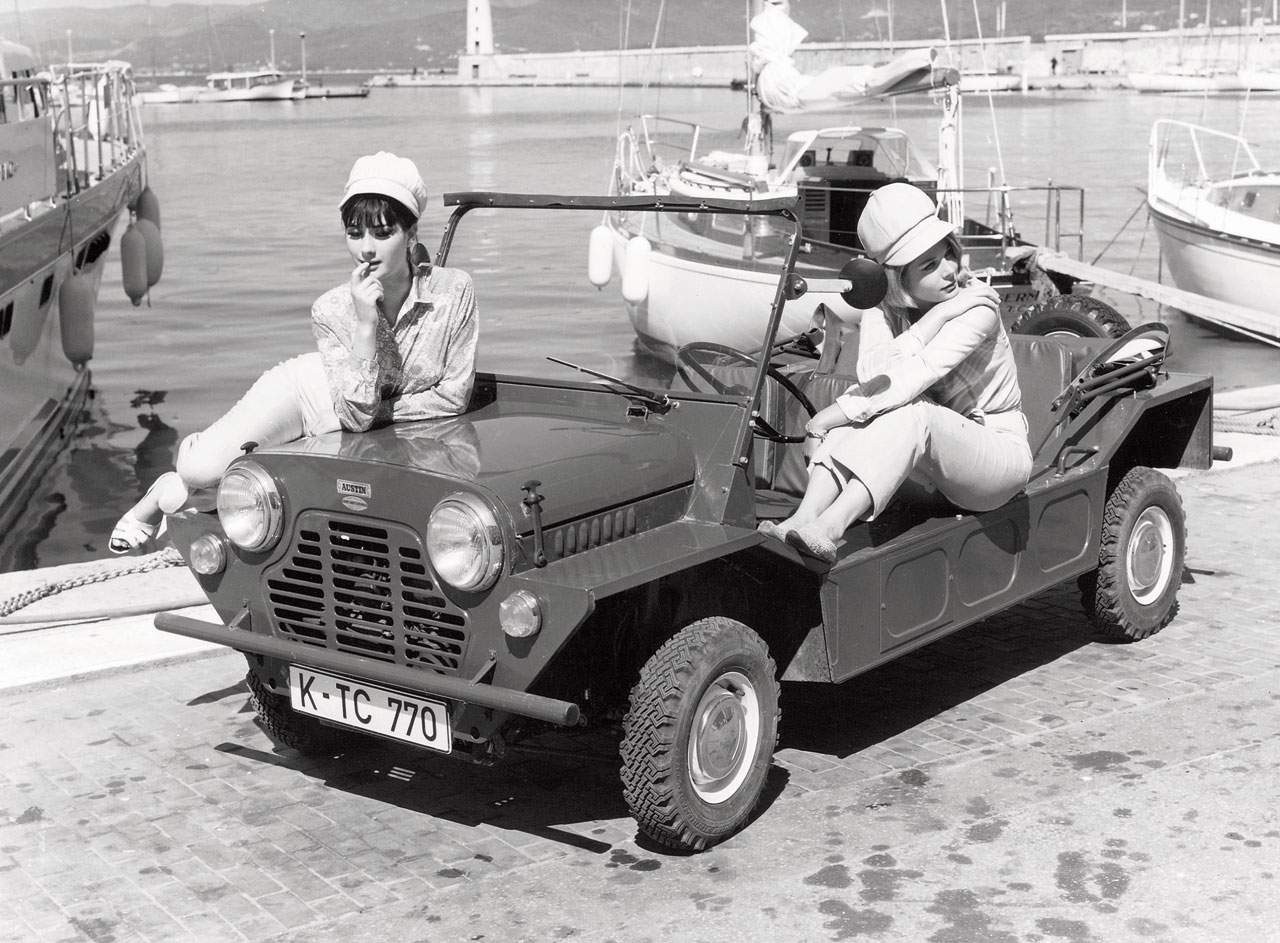 1964 saw the arrival of the most open of all the classic Mini variants â€“ the Mini Moke. This fun-loving small car actually had very serious origins, having left the drawing board as a universal-usage model for the military. Its robust construction, small dimensions and low weight ticked every box for a vehicle that might need to be dropped by parachute or carried by helicopter. Essentially the Moke consisted of a floor pan with wide, box-shaped body sills, a bonnet and windscreen attached. The seats were little more than metal buckets with cushions, while the only protection from rough weather came in the form of a folding soft-top. The Moke would have been ideal for military use, had it not been for its low ground clearance. While this was a fatal blow to its hopes of a career in Her Majestyâ€™s armed forces, it did little to dampen enthusiasm for the Moke among fun-loving civilians. Around 14,500 of the open-to-the-elements Mini offshoot were built in England up until 1968, before production rights were sold first to Australia and later Portugal. All in all, the number of units produced over its lifespan is estimated at around 50,000. To this wealth of variants can now be added the MINI Countryman. This latest MINI creation sees the brand demonstrating its extraordinary potential once again with a totally new vehicle concept. The extra space, raised seating position, additional ground clearance and ALL4 all-wheel drive of the MINI Countryman present customers with new ways of enjoying the driving fun embodied by the brand. And yet, in both its design and handling, it remains unmistakably a MINI. The MINI Countryman strikes the onlooker straightaway as a stand-alone, powerful, robust and versatile vehicle. Equally as conspicuous are design elements and proportions typical of the brand. This combination allows the fourth model in the MINI line-up to bridge the gap between the fundamental MINI concept and a modern Sports Activity Vehicle.