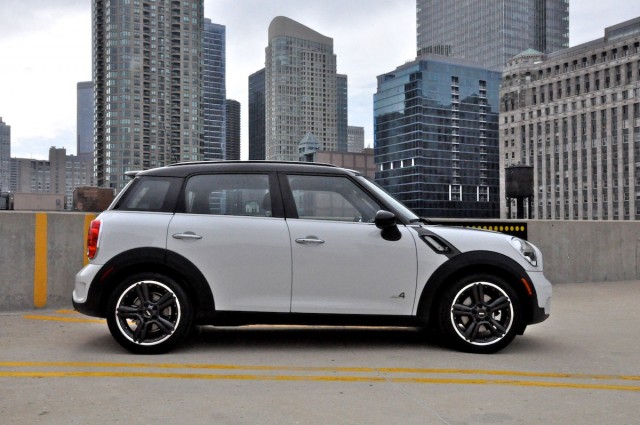 In one week I’ve gotten more questions and comments driving the Countryman than I have driving any car since the Tesla Roadster. And that includes the 1M press car I had two weeks ago. Seemingly everyone is at least interested in this new MINI and doesn’t mind coming up to me to share it. And why not. It’s the same general cross-over shape we’ve seen for years but made miniature and more interesting.

From the driver’s seat our Countryman is off to a great start as well. After 500 miles I’m getting seeing anywhere from 20-26 mpg in the city and 30-32 on the highway. However with the heat in Chicago well into the 90’s I have noticed one issue that I hadn’t seen in a MINI since my 2002 Cooper.

With the air on the Countryman has a tendency to feel overly sluggish upon initial acceleration. In fact it’s so bad that I’ve actually stalled the car twice trying to match engine revs and the clutch take-up. Based on my previous experience it seems that this is a problem with the All4 and less with the front wheel drive models.

Speaking of the clutch, the engagement point is noticeably different (ie higher) than any MINI I’ve driven in the past. Worse yet, it’s more vague at the engagement point than I’m used to with other MINIs. It all seems odd knowing that it should be basically the same clutch found in all the other current MINI models. This combined with the engine being sluggish with the aircon has made me feel like a 16 y/o trying to drive a stick for the first time.

All that aside our Countryman is easily the best built MINI I’ve ever driven. From the materials to the feel, MINI has created a distinctly premium car with the R60.