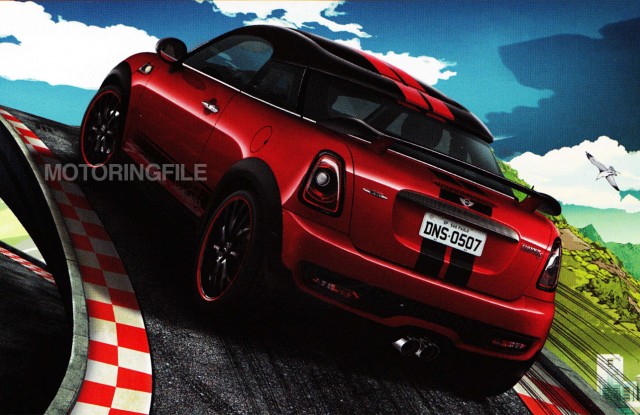 The MINI Coupe has debuted, been driven and totally dissected. Now it’s for the accessories. Specifically of the JCW variety. MINI will be releasing a set of new JCW accessories later this fall for the Coupe starting with what you see above. And the eye-catching has to be the JCW spoiler. Let’s go through the list and take a closer look.

– JCW Coupe Spoiler. Reportedly this blocks the standard spoiler that raises at 50 mph but gives the car even less rear lift.
– JCW Engine Tuning Kit. In the US the JCW Engine kit increases power from 181 hp to 195 hp and torque goes up to 184lb-ft between 1700-5500rpm (and about 200lb-ft between 1800 to 5000 rpm with overboost).
– Black trimmed JCW Rear Lights. Hot aren’t they? We’re not entirely sure if these are interchangeable with the R56 but we know they’ll work on the R57 and the forthcoming MINI Roadster.
– Carbon Rear Trim This is the same as on the R57.
– Cross Spoke R113 Red Stripe Wheels. These are new for 2011 and are based on the best looking JCW wheel currently produce.
– Cooper S Side Decals. Self explanatory and not necessarily something we’d put on a car full of JCW accessories.

Click on the image below for a hi-res view.

Hat tip to Oliver from attractive4mini.