The year-over-year sales results for October are in, and led by best-yet Countryman sales, MINI is up 37% overall. The afore-mentioned Countryman, which has been on sale in the US since last December, had its best month to date with 2,012 units sold state-side. Last year we predicted the Countryman would eventual eclipse sales of the hatch this winter. As you’ll see after the break it’s around 50 units sold away from doing that already. To say the Countryman has been a success in the US market is a bit of an understatement.

Also interesting are the sales numbers on the Coupé, which at 414 units, is only outselling the Convertible. Look for that number to rise with a full month of sales and better awareness of the new model, but also expect the Hardtop and Countryman to stay at the top and battle for the sales lead over the next year.

Full figures after the break. 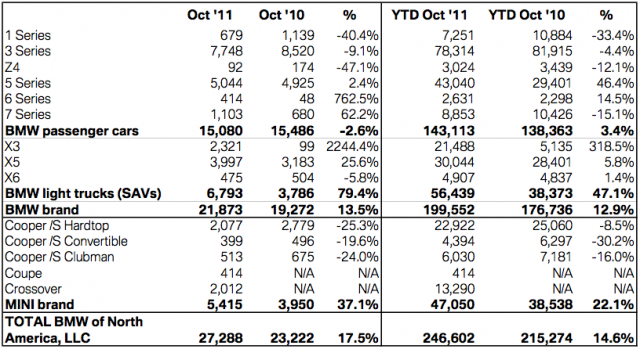