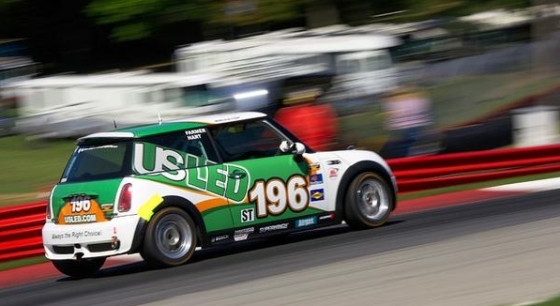 [Official Release] Three race weekends in just 22 days: June was a busy month for RSR Motorsports and its MINI racing cars in the USA. The team’s reward is the title “MINI Star of the Month”.

The MINI brand is particularly close to Randy Smalley’s heart. The team principal of RSR Motorsport has every confidence in the ability of his MINI racing cars, which he has now been running for five years in the Continental Tire Sports Car Challenge – a touring car championship held in the USA – against big-time makes like Porsche, Aston Martin and Chevrolet. And he has done so with great success: multiple top-ten finishes and class victories on renowned circuits around the USA justify his confidence. RSR Motorsport’s latest highlights came in the form of victory in the ST class with the MINI Cooper S at the New Jersey Motorsports Park in Millville in 2010 and 2011.

Randy earned the opposition’s respect with his three MINI racing cars back in 2008, just one year after RSR Motorsport’s rookie season in the Continental Tire Sports Car Challenge. The RSR Motorsports cars broke the lap record in their class at Lime Rock Park in Connecticut, the Mosport International Raceway in Ontario (Canada), the Mid-Ohio Sports Car Course and the Miller Motorsports Park in Utah, and started from pole position in their class in Mid-Ohio and Utah. The secret of RSR Motorsports’ success? “Teamwork, passion and a never-ending desire to keep getting quicker,” says the team principal.

This formula is like a magnet, attracting other drivers. Only recently, RSR Motorsport announced the acquisition of new drivers who will now appear in the RSR Motorsports MINIs.

The new additions to the crew were necessary too, in order to complete the mammoth programme faced by RSR Motorsports. No less than three race weekends were scheduled for June, meaning RSR Motorsports really had its hands full. Mid-Ohio, Road America and Watkins Glen were the venues, with Mid-Ohio proving the most successful for RSR Motorsports from a MINI point of view. Sarah Cattaneo and Kyle Gimple finished 30th in a field of 62 cars in their MINI. The victory may have been contested between the big names, but the fans once again had more than half an eye on RSR Motorsports and MINI.

The team could be forgiven for feeling it has earned a break after the exhausting last few weeks, but the championship goes on relentlessly. This weekend (6th /7th July) RSR Motorsports will be testing at the Indianapolis Motor Speedway, before the eighth round of the championship is held at the same venue on 27th July. MINI Motorsport will keep you up to date with the results at Facebook.com/MINImotorsport and is looking forward to reporting on the MINI Motorsport family’s next successes in July. 3, 2, 1, Go MINI.