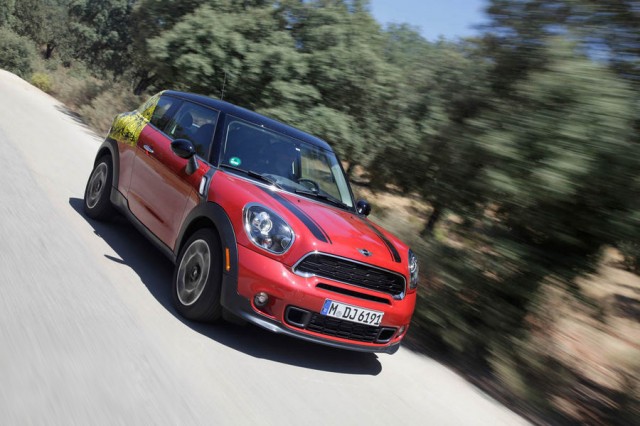 The chaps at Evo have managed (along with a few select UK and Euro press) some seat time in the Paceman All4 prototype. While still butt-wrapped in swirly nonsense, it looks like they got a pretty thorough look at the car. We’re all familiar with the basic looks and layout of the Paceman, but the burning question for many of us has been how does it drive? Evo‘s Mike Duff gives us his impression:

You’re probably expecting to hear that the Paceman drives pretty much like the Countyman. But it doesn’t. The revised suspension settings have, on our first acquaintance, turned it into a considerably more dynamic machine, with less roll, more grip and a far less front-biased chassis balance, certainly on the dusty tarmac of our Spanish test route.

We drove the ‘All 4’ version which, like its Countryman sister, uses a part-time four-wheel drive system to redistribute torque to the rear axle when slip is detected at the front. On the Countryman you need to be pretty much driving on ice or mud to feel the benefit, but the Paceman proves far happier to play on slidey surfaces than its understeery sister. In that regard it feels like a bigger Mini hatchback.

Keep in mind, this is still just the Cooper S version of the Paceman. If the Countryman is any indicator, we can expect JCW Paceman to be all the more fun and dynamic. Duff dings the Paceman for many of the expected goldielocks complaints, but I think we all know what we’re getting into with this car. It’s bigger than the hardtop hatch, less practical (ostensibly) than the full on Countryman, but it also appears to be a lot more fun than the Countryman. If MINI is ultimately aiming for the a go-to vehicle for intersecting fun driving dynamics with available AWD, perhaps the Paceman really is just right.

Head on over to Evo for their full review and lots of photos.