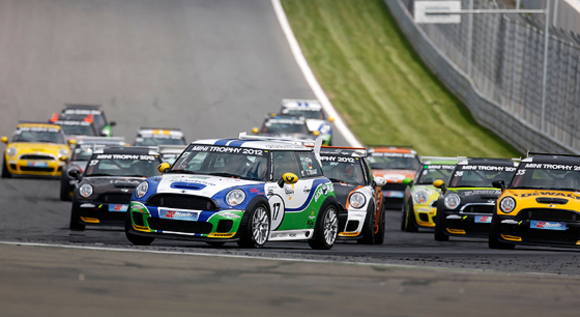 [Official Release] Others may have claimed wins, but Jürgen Schmarl moved to the top of the table. The MINI Trophy in Spielberg/Austria provided real MINI-style racing with plenty of action and a dose of glamour.

The journalists in Spielberg, in the Styria region of Austria, jotted down two comebacks in their notebooks. Number one: Jürgen Schmarl is back at the top of the standings. And then there was Cora Schumacher, whose return to the MINI Trophy after illness gave the series an extra shot of glamour.

To succeed in the MINI Trophy, you have to produce flawless performances. There is huge strength in depth, and the risk of losing everything by crashing out is immense. Jürgen Schmarl shone at the season-opener, leading the championship and then following on where he left off in Le Castellet. However, the turning point in his season came in the second race at the MINI United festival in France. Schmarl left empty-handed, while Ralf Martin picked up maximum points. Was that it for Schmarl’s hopes of winning the championship? Not when you have such a fighting spirit and fortune truly favours the brave.

Lady luck back on Schmarl’s side.
Last weekend, Jürgen Schmarl returned to the top of the table in the new format of the MINI Trophy, which was introduced in 2012. Always slightly better than his rival Martin, Schmarl was once again a touch faster when the Trophy made its debut in Austria. A retirement in the second race, in which he still managed to pick up points, meant Martin failed to capitalise on a fading Schmarl. A podium finish in race one and fourth place in the second race at the undulating circuit proved enough to see Schmarl return to the top of the standings.

Victories for Tekaat and Kirsch.
The challenge in Spielberg was a mighty one: after the start/finish, the Grand Prix circuit climbs steeply 70 metres in altitude by the second corner, after which the drivers are taken on a rollercoaster ride back down into the valley – a journey littered with medium-quick and quick corners. Thomas Tekaat found the perfect driving style in race one – crossing the line ahead of Schmarl. In race two, Steve Kirsch was the main man – followed by Stephanie Halm.

It remains a tense affair.
178 to 160 – that is how close the duel at the top of the table between Jürgen Schmarl and Ralf Martin is. Another six races remain at the Lausitzring, Nürburgring and Hockenheimring. It promises to be an exciting end to the season, particularly as Thomas Tekaat (158) and Stephanie Halm (157) are also still in with a chance of claiming overall victory in the 2012 MINI Trophy.

The 2014 Dakar Rally is Underway & MINI Just Took the Lead