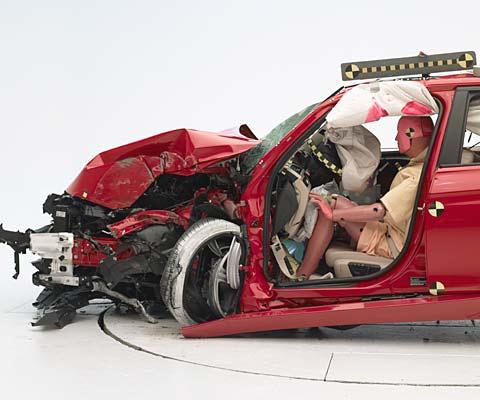 Safety is of huge importance in automobiles, there is no arguing that. Over the past few decades, the work of the Insurance Institute for Highway Safety has held auto manufacturers to a higher standard for protecting occupants in a crash situation. The caveat to all this increased safety is additional weight and technology infiltrating cars. The fact is safety sells, and cars that can tout being a “Top Pick” usually see the benefit in increased sales so car companies are building to these tests. Today, the IIHS introduced the world to its first additional test since its original offset test, the small overlap frontal test. What is the test and how is it relevant to MINI? Read on.

In the test, 25 percent of a car’s front end on the driver side strikes a 5-foot-tall rigid barrier at 40 mph. A 50th percentile male Hybrid III dummy is belted in the driver seat. The test is designed to replicate what happens when the front corner of a car collides with another vehicle or an object like a tree or utility pole. Outside of some automakers’ proving grounds, such a test isn’t currently conducted anywhere else in the United States or Europe. Basically, the test is testing the structural integrity (for crash purposes) of the wheel well and firewall as the test is designed to miss the engine and frame structures.

The test was conducted on eleven segment-similar vehicles including the BMW 3 Series. Substantial damage inflicted on the driver’s side of each vehicle and is clearly evidence of the test’s unusually violent nature. The new rear wheel drive BMW F30 Series scored a middle of the pack “marginal”.

One would think that front wheel drive vehicles (cars like the MINI) would have an advantage in this test because they offer more mass and drive train components (which tend to be more substantial) in that are but in this first round that was not entirely the case. The Acura TL and Volvo S60 earn good ratings, while the Infiniti G earns acceptable. The Acura TSX, BMW 3 series, Lincoln MKZ and Volkswagen CC earn marginal ratings. The Mercedes-Benz C-Class, Lexus IS 250/350, Audi A4 and Lexus ES 350 earn poor. All of these cars were 2012 models.

What this all means is that either brands are going to introduce new heavier, higher strength steel into these areas (like Volvo already does) or do poorly on the test and watch safety conscious consumers flock to other cars that perform better. For MINI it’s an interesting issue. A nimble and relatively lightweight car like the MINI is great at active safety – the ability to get out of an accident before it occurs. The added weight potentially needed to perform better could dull the quick reactions of the MINI and reduce one of its biggest safety attributes.

That said there is one caveat to all this aside from safety. This could force others outside of the BMW Group to look into carbon fiber on a larger scale and help improve safety and decrease weight simultaneously. We can dream right?

The above video is a good example of the BMW Group’s focus forward on safety and how they design cars for real world safety (not just to pass tests).

The First F56 MINI Crash Test Results Are In