MINI USA started 2017 with January volume down 4% compared to 2016. Not good, but not that bad either. Overall, light vehicle sales dropped 1.9%, as most brands tried to bring in Jan sales into December to eek out another record year (they didn’t succeed). Also, low interest rates, increased incentives and relatively cheap gas means the shift to larger vehicles has continued unabated. While Matt’s MINI Index climbed 9%, this is a bit of a red herring. VW is one of the larger players in the Index, and they seem to have finally been forgiven by the buying public for their emissions sins, with monthly volume growing by double digits for the third consecutive month. But note that MINI was the best performer of the three brands in the index that only sell, small, well smallish, cars. Both FIAT and Smart dropping more. Whatever was in the Kool-Aid seems to have gone away, as Smart dropped about 70% compared to December when they shipped over 1,100 units! 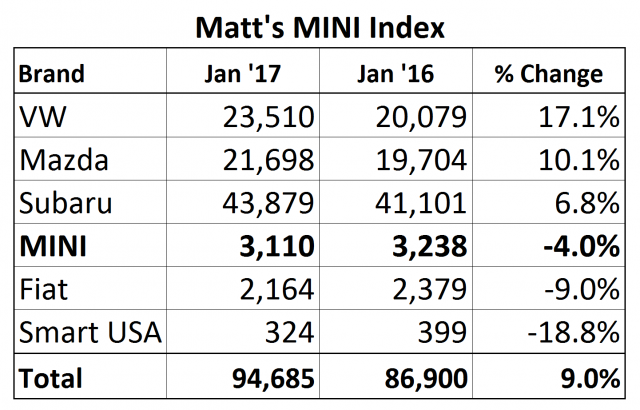 As usual, the Clubman and Countryman did well here in the US. With the retail launch of the Countryman shortly and the release of the plug-in hybrid version closer to mid-year, it looks to be a good year for the bigger MINIs. And one lonely Paceman moved in January. If you bought that car, let us know where and what kind of deal you got in the comments!

With used vehicle sales up 18% to 2,187 units in January, MINI USA continues to be a relatively stable, if smaller company than in before the 2016 decline. MINI seems unable to articulate what the forever rumored fifth model might be, so much so that we haven’t heard mention of anything serious in months! For many of the past months, MINI has failed to even get a mention, other than the perfunctory quotation of figures, in the press release that accompanies the monthly sales figures. It may be that the corporate overlords are happy with the continued world-wide growth, while BMW NA continues to have more serious trouble and is demanding most of the internal focus. Whatever it is, MINI isn’t doing great, but could be doing a lot worse!

Worldwide MINI Sales Down for February