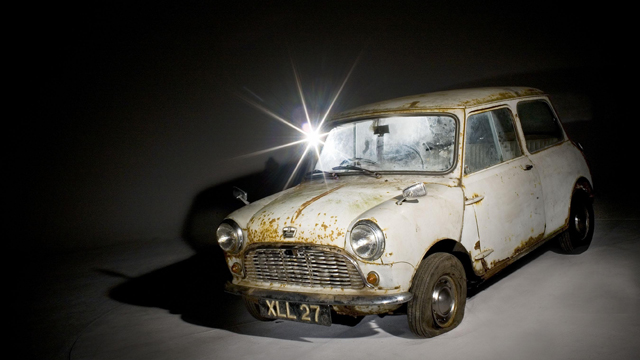 Remember that barn-found, unrestored Mini we told you about a little while ago? Well it finally went to auction and snagged £40,250, or $65,241. Here’s how the auction house described the car:

The car is complete and has all the features that distinguish these very early Minis, including the famous glass washer bottle. Some parts have been removed for security and ease of transport but all will be provided at the sale together with a Swansea V5 registration document. The driver’s door has been replaced but other than that only a few small items appear to have been renewed. ‘XLL 27? retains its factory Farina Grey paintwork, all its original panels, engine, transmission and the original registration number. The interior is likewise original, intact and complete except for the carpets. Even the original Bluemels numberplates survive and there is evidence to support the belief that the recorded mileage of 30,041 miles is correct. A paper brake service label remains fixed to the near-side door jamb, recording work carried out at 17,942 miles. There is evidence of corrosion in the front floors, ‘A’ panels, sills, doors, rear seat well, boot floor and rear valance but a surprisingly high percentage of the shell is intact. The rear sub-frame appears original, as do all the steel hydraulic pipes. The engine has not been run for many years. The August 2011 issue of Classic & Sports Car magazine devoted six pages to this amazing survivor, which represents a unique opportunity to own an astonishingly correct example of one of the 20th century’s greatest cars in its earliest, purest form. There can be few more important examples of British automotive engineering.

Other classics at the auction sold for as little as $1,024 and as much as $311,052, showing an interesting range in the offerings that day. No word on who the buyer was, or if they intend to actually restore the rather rough little Mini to showroom order.