This post is also featured over on our sister site, BimmerFile.com.

In various interviews over the past few months, BMW executives have hinted at grand plans for the UKL platform. Reported by both MotoringFile and BimmerFile, the UKL platform will spawn an onslaught of FWD models. This will make MINI more long-term viable and will drive the BMW Group to greater economies of scale. Yet just how far BMW is willing to go with FWD, and how big the MINI brand will get hasn’t really been understood until recently.

BMW has plans — BIG plans — for such a small automaker. According to several sources (and recently coraborated by “Scott27” — our favorite inside source), the BMW board has given approval for a number of front wheel drive models in both the BMW and MINI lineups. Surprisingly, this even includes a MINI four door sedan. According to those who’ve seen the proposal, it’s an extremely attractive car that leverages the MINI floating roof and wrap-around glass. Apparently, the rear is similar to the Paceman, with sculpted front lines reminiscent of the 2008 MINI Crossover Concept. However, this variation of the MINI design language will be unique to this sedan, letting most of the rest of the lineup continue to follow the visual lead of the F56 hardtop hatch.

The MINI sedan is just the start of further model expansion. There will be several crossovers and utility vehicles, as well as sporting coupes and convertibles. Here’s the list for both BMW and MINI as we currently understand it, keeping in mind some of the details may change.

1. BMW 1er Urbanic Compact 3/5dr – Upcoming City hatch based on the next MINI, making it BMW’s Audi A1 rival.
2. MINI 3/5dr hatch – Increased demand for utility leads to the next generation MINI, due next year, to feature available five doors for the 1st time.
3. BMW 1-series Sedan – Baby sedan based on the UKL architecture and aimed at global markets for small five seaters.
4. MINI Sedan – A sporty four door MINI aimed at further growing the market for MINIs. Could potentially be MINI’s best seller worldwide, overtaking the Countryman.
5. BMW 1-series Active Tourer – Production version of Active Tourer Concept launched at IAA 2013.
6. MINI Traveller – MINI’s version of the Active Tourer. It’s designed to show how both cars can co-exist with individual style and flexibility.
7. BMW 1-series Urbanic Roadster – BMW’s open top version of the City Car will inherit two seats and will feature a rear deck with layered butresses like the BMW 6-series Cabrio and BMW i8. These are designed for clip on roof panel.
8. MINI Convertible – The F56-generation version of the popular 4-seat, open top MINI.
9. BMW Z1 Sportster – To provide greater economies of scale, The Z1 will be BMW’s equivalent to the MINI Coupe and Roadster. It will be FWD and powered by more powerful three cylinder engines than what we’ll find in the MINI range. The design is derived from the well-received 2011 Vision ConnectedDrive concept car.
10. MINI Roadster – The next Roadster and Coupe will launch with a sportier look completely separate from the standard MINI. MINI design language will remain but the bodywork will no longer be based on the hardtop hatch.
11. BMW Z1 Sport Coupe – A coupe version of the Z1 will complete the BMW Z twins.
12. MINI Coupe – Coupe version of Roadster, and as mentioned above, more individual in appearance than the standard hardtop hatch.
13. BMW X1 – Next generation of BMW’s highly successful SAV moves to the UKL architecture to offer more flexibility, including xDrive.
14. MINI Countryman – Next generation of the global MINI juggernaut, the Countryman will finally share its underpinnings with BMW X1.
15. BMW X2 – Sport Activity Coupe variant of the next BMW X1 , FWD with optional xDrive and the first BMW SAC to appear as both a 3dr and 5dr. Think of it as the BMW version of the MINI Paceman.
16. MINI Paceman and Paceman XL – Next generation of newest MINI member will be offered with the current 3-door version, as well as a 5-door.
17. BMW Family Activity Sports Tourer – BMW’s hybrid of an SAV and MPV, the FAST will feature a “touring” bodystyle and aim to sew up the small, luxury people carrier segment.
18. MINI Clubman – Current car revisited with more style and more flexibility. Anticipated as more of a Shooting Brake with dynamic raked roof and forward looking proportions.
19. Next Generation BMW 1 Series Sedan – Due in 2017 and is expected with both front and all wheel drive available. 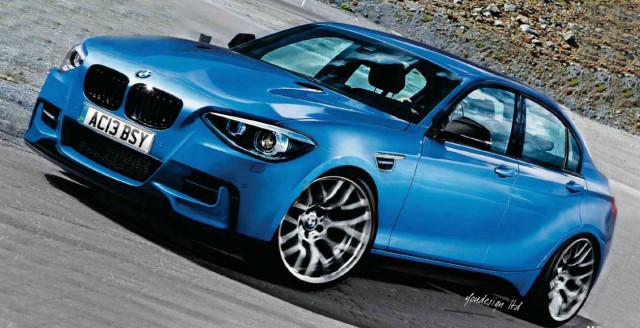 However, for all this FWD, BMW isn’t giving up small rear wheel drive cars. In fact BMW and BMW M have big plans for the 2 Series range. Specifically BMW M will base a car on the 2-series with a Gran Coupe variant of the 2-series Coupe. Adding two extra doors to a slightly longer wheelbase and roofline, the Gran Coupe will set itself apart. This car will be BMW’s answer to the Mercedes-Benz CLA, but in a more enthusiast friendly RWD form. The 2-series Coupe will also form the foundation of what will effectively be the second generation 1M. Here’s the full rundown of future small, rear wheel drive cars from BMW:

– BMW 2-series Coupe – Coupe version of the 1-series hatch. Unique front and rear style, with a sleeker, rounded roof. Yet still in compact proportions. Premieres at IAA 2013.
– BMW 2-series Cabrio – Soft top version retains the unique appearance of the 2-series Coupe.
– BMW 2-series Gran Coupe – A 4-door addition of 2-series Coupe with slightly lengthened wheelbase and roof line. It’s aimed to position BMW’s RWD as dominant over the Audi A3 Sedan and Mercedes-Benz CLA.
– BMW 2-series Gran Sports Tourer – A Hyundai Veloster-type, asymmetrical touring coupe inspired by the classic BMW 2002 Touring variant. This car has many admirers in Munich.
– BMW M2 Coupe – Successor to the BMW 1-series M Coupe, the M2 Coupe continues the same formula that made the last car so memorable. While no huge competitor in the HP race, four cylinder will bring less weight, which matters most in a car of this type. More driving enjoyment and overall feel is considered of higher priority than who has the biggest horsepower numbers.
– BMW M2 Gran Coupe – The baby Gran Coupe inherits a lot from its four door big brother: 340 HP, Four doors and RWD. It will be a direct competitor to the Mercedes-Benz CLA 45AMG.

The Science of Speed