Preston Thomas Tucker. Most people know him as the car manufacturer Jeff Bridges portrayed in the [critically acclaimed](http://www.rogerebert.com/reviews/tucker-the-man-and-his-dream-1988) film *Tucker: The Man and His Dream*. Others know him as one of those formidable entrepreneurs that only the United State seems to have the recipe for. Following the end of World War II, Tucker strongly believed the US car market was ripe for disruption and that unprecedented car designs would bring people back into the dealerships. With that in mind, he started the Tucker Corporation with the ambition of building [the car of tomorrow](http://en.wikipedia.org/wiki/1948_Tucker_Sedan). Even though it would never fully reached production status it would be revolutionary in its form and function by boasting a fuel-injected engine, disc brakes, side impact protections and adaptive headlights. While one can argue about the relative success of Mr. Tucker’s venture, he was, by any measure, a visionary; he saw the future and acted to change the world regardless of the obstacles he faced. Though we must remain objective in evaluating what the Tucker Corporation achieved and what MINI is doing today, our favorite car brand had to overcome serious challenges to remain the undisputed contender in the premium small-car category. After a 5,142 miles [MTTS](http://www.minitakesthestates.com) rally, not only has our F56 surpassed these challenges, but moreover MINI might have a serious sales hit on their hands, especially with the soon-to-be-released F55.

##Change Is Good##
As an avid MotoringFile reader, I noticed the change in perception regarding the exterior design of the F56 since the first spy photos came out last October. Sentiment went from complete disdain and name-calling to neutral and appreciation as the official content – including the car itself – rolled out. The front treatment, especially for the S, is the one detail enthusiasts will love to hate for years to come. And while MINI could have probably done a better job with it (i.e F54 Clubman Concept), it is difficult to say to what extent given it is nearly impossible for a small car to meet the EU’s new safety requirements without compromising on design. Here at MotoringFile, we got used to the style of the F56 and to be frank, I actually like it. Cars like the Pontiac Aztek, the Chrysler Sebring Cabrio or the Nissan Murano CrossCabriolet rightfully deserve to be hated and to be taken off market as their designers – all from the same family I presume – probably jumped off a bridge to end their respective lives. But, let’s be realistic; the MINI design team has done a fine job under the regulations they had to work with.

Overall, the dislike seems to be fading away replaced with simple curiosity. Case in point,  I stopped counting the number of MTTS attendees that had the same reaction when they first saw our car: “Is that new MINI? Hmm, it’s a little bigger. How is it inside? How does it drive?”. 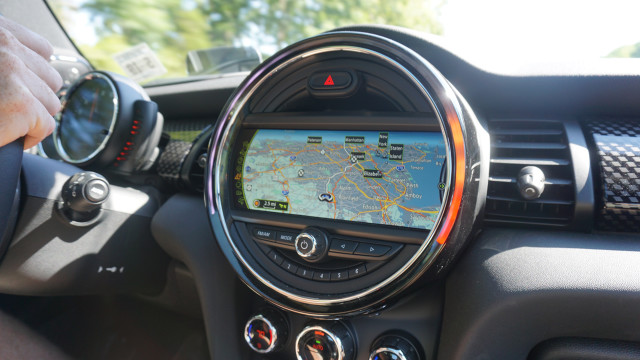 ##Revolutionary Interior##
When looking at previous generations of MINIs, if there is one thing revolutionary about the F56, it is the interior. It is by far the best finished product compared to its predecessors, but this is somehow expected. In-car technology has significantly evolved and the corresponding cost has substantially decreased over the past seven years. The UKL platform finally allows MINI to fulfill the promise of bringing the quality of assembly, plastics and switches up to BMW standards. Rattle symphonies, from the tiniest road imperfections, have made way for the delicate sound of robustness (note: this is something we tested extensively thanks to Chicago and Boston roads filled with cracks and potholes as large as the Vredefort Dome). In addition, MINI designers have tackled a number of critiques found in the questionable J.D. Power’s Initial Quality Study (e.g. window toggles, speedometer) and although I’m not an advocate of having an extensive part of product development dictated by consumer feedback, I can’t deny that MINI has created a very compelling interior package.

Does this mean the interior of the F56 is perfect? Of course not… I understand why 54 year old Jeremy Clarkson complains that the light animations coming from the center console are a distraction. This is possibly an interesting topic for another discussion.  However, there are definitely more pressing issues that MINI could easily fix:

– An additional USB port would be nice; in 2014, one port is just not enough

– MINI Connected has gotten better, but there are still so many ways to simplify the UX; the most radical one would be to scratch it altogether and replace it with [CarPlay](https://www.apple.com/ios/carplay/)

– QA engineers probably forgot to test the head-rest buttons; they fell off a couple of times during our journey

– While our press car came with the Harman Kardon sound system, we barely heard the difference with the standard one. No matter the music player/setting combinations we tried, we could not bring it to life

All that aside, there are plenty of positives. Perhaps my favorite are the completely new sport seats. These new seats are a quantum leap compared to what was offered in the RXX series (I would even include the RECAROs in that comparison). Words escape me to describe how good they are. I am 5’9” and have suffered chronic back pain for three years. I have had a considerable amount of driving time with each of the prior generations of MINIs and I spent a third of my MTTS trip in the back of the F56, so trust me when I say that these seats are a godsend. Go test them now!

##The Right Car At The Right Time##
I’d like to set the stage before I dive into this section. My first car was a R50 D that I drove for five years and still runs strong for my folks today. I had a R53 and a R56 S for short periods of time. I currently drive a 135i Coupe. And I regularly switched between our F56 S Automatic, a R56 and a JCW R58 during MTTS. All in all, I believe I am qualified to make a comparison.

Before one can drive their car, one has to actually get themselves into it.  Doing so with our Hatch was no easy task. The reason being that the coverage radius of the Comfort Access System is (very) limited; it couldn’t even be opened from the passenger-side. I unfortunately can’t erase from my memory visions of db and Todd making love to the driver-side door to get it open. It is important to note that the same system is better implemented in BMWs.

Turning on the engine of this new Cooper S is surprising. It is a quiet car at idle and during city driving, but it transforms into a pavement-eating beast once you floor the magic pedal. That is what I mean by the “right car at the right time.” It’s not going to jump to your throat when you drive off to work at seven in the morning – I’m looking at you, JCW Coupe – but the predictable torque curve will be quickly available as needed. In regards to handling, we threw it around corners at very high speeds and the typical MINI reaction ensued (we had smile on our faces). Observers indicate that the F56 is not as sharp as previous models. I beg to differ – it felt very similar. Although, if I had to option a 2015, I would most certainly get the sport suspension. 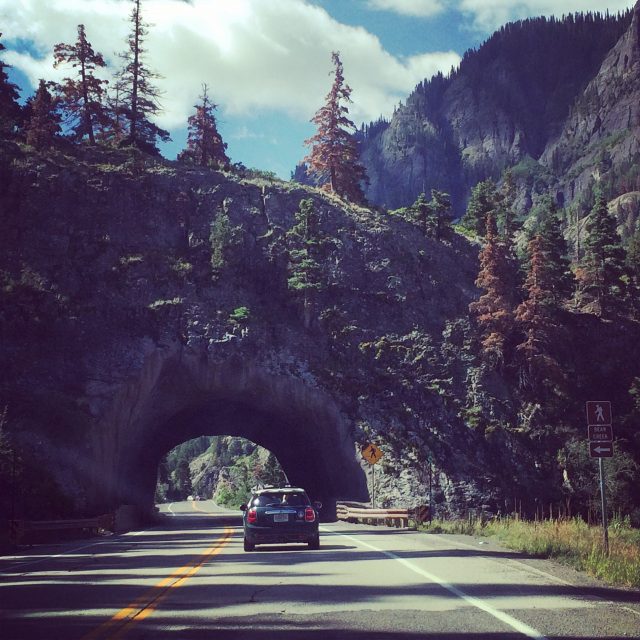 As you see, driving a MINI is as fun as ever and I’m not ashamed to say that the revised automatic transmission is partly responsible for that fun. What?! Crime of lèse-majesté! Car manufacturers and automotive journalists conspire to eradicate the manual transmission and to force us into driving automatics! No, none of this is actually happening. All my cars had manual transmissions (except for my current 135i that sports a 7-speed DCT),  so take my word for it when I tell you that the automatic transmission is as good as they say. It’s fast, smooth and easily adapts to traffic conditions and driving styles. And for once, we had fun playing with flappy paddles, especially on the twisties of the [Million Dollar Highway](http://en.wikipedia.org/wiki/U.S._Route_550).

Again, is everything perfect in MINI wonderland? No, but it’s very close and I can’t wait to drive the 2015 JCW. In the meantime I would like MINI to investigate the following:

– Fuel economy is disappointing. MINI advertises 30/41 mpg figures but we oscillated between 31 and 33 mpg based on 80% highway driving. Taking for granted that we drove hard and changed drivers often, it seems the only way to attain an acceptable fuel mileage (i.e. 39 mpg) is to turn on Green Mode

– The brakes have less feel to them. Our sources tell us that following complaints from owners, MINI USA moved to the dustless pads for the US market. Although these new pads approximately have the same stopping power as their predecessors, they feel weaker

– The cruise control is overly complicated. Tap “+” to go faster and tap “-” to go slower; it’s as simple as that. There is no need for a quarter of a tap to go 5.26 miles faster. But I’m not going to lie; Gabe, db and Todd love the revised cruise control 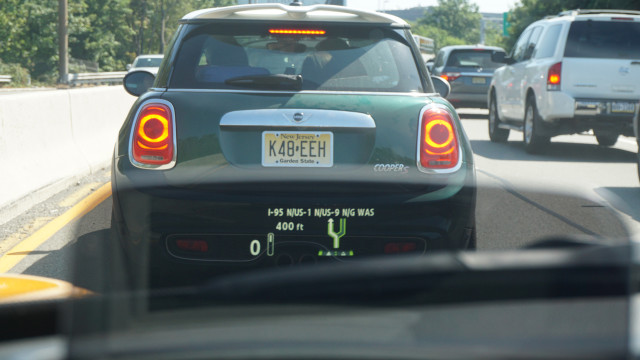 Let’s be positive again and focus on my two favorite driving features. Before this F56, I never had a chance to test a head-up display. It’s a nice-to-have feature that requires small changes in your driving behavior, but once you’ve tried it you can never go back. It’s like Xenon headlights; nobody in their right minds would ever use halogens again after Xenons. Finally, the ultimate best feature, the highlight of MTTS: the [JCW Exhaust](http://www.motoringfile.com/2014/08/08/mf-exclusive-early-look-at-the-f56-jcw-engine-kit-exhaust-wvideo/)! I’m one of the lucky few that got to test a pre-production version of it. It is as good as it looks and even better than it sounds. My opinion is that every single MINI should sound this way and if I owned a dealership, I’d make sure each of my customer would get it installed. That’s how good it is. Everyone, grab your holiday shopping list and add the JCW exhaust to the top of it, now. Don’t forget to tell your family that you won’t be with them on Christmas morning because you will be too busy playing with your new toy. Sorry, children.

##This is The MINI You’re Looking For##
While I had some appreciation for the car before driving it, I was still afraid it would disappoint. As a nerd and a geek, I live for new stuff. I can hardly contain my excitement prior to an Apple keynote and these days I am practicing Jedi-like patience to wait for the release of Star Wars VII. So when new stuff doesn’t meet my expectations, sadness is usually follows; the kind of sadness James May experienced after he drove the Countach. Fortunately for us, MINI did it again and failed to disappoint.  All I can say is if you are on the fence about buying a new car, head to the closest MINI dealer right now. Also for anyone still believing that “they ruined the brand”, it would probably do them some good to read a biography of Alec Issigonis.

Do you really need Premium Fuel?