Go British.
Forty-five years after the launch of the Mini Traveller in September 1960, MINI is proudly presenting the MINI Concept Tokyo at the 2005 Tokyo Motor Show, a design study taking up the basic philosophy of the “travelling” Englishman at the beginning of the 21st century under the motto “Go British” in contemporary style. And indeed ” the appearance, style, and look of this Concept Car with numerous design details already lauded as genuine icons is typical of MINI all the way. 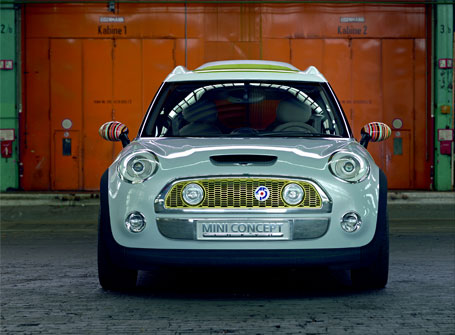 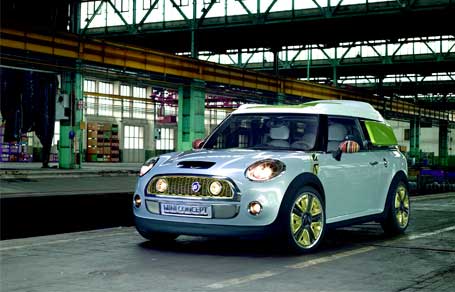 Sporting Look.
The overall look of the car is firm, taut and muscular. The wheel arches, ?the shoulder line and powerdome, in turn, are striking and almost spectacular, the air intake on the engine compartment lid and the twin tailpipes both typical of the MINI Cooper S accentuating the car”s sporting look. In its design, the MINI Concept Tokyo is a clear statement ” the car has character, it looks powerful and elegant all in one, and, through its higher roof, it also accentuates its functional benefits.

Intelligent MINI Features in the Concept of the Car.
An important aspect in developing MINI Concept Tokyo was to make entering and loading the car as simple and straightforward as possible. Precisely this is why all four doors (driver/front passenger/rear doors) come with suspension points and hinges with parallelogram kinematics swivelling in parallel to the side and to the front in one single movement, thus offering maximum access to the interior of the car. The sliding side windows at the rear open electrically, the front section moving back parallel beneath the rear section. Thanks to the omission of the B-pillar, MINI Concept Tokyo generates a particularly generous, coupe-like impression. The long wheelbase and the Easy Entry System with swivelling driver and front passenger seats, in turn, provides good and convenient access to the two seats at the rear, and the windows in both rear doors retract electrically. 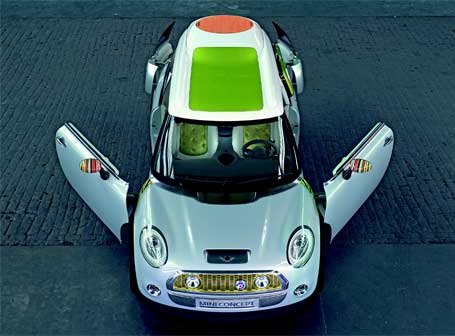 Intelligent Cargo Roof for Consistent Use of Space.
MINI Concept Tokyo offers new options and flexibility for all eventualities wherever you may go, even on the roof: The cargo roof houses both a table and two chairs, with the appropriate section of the roof folding down when required from outside in front of the rear window. 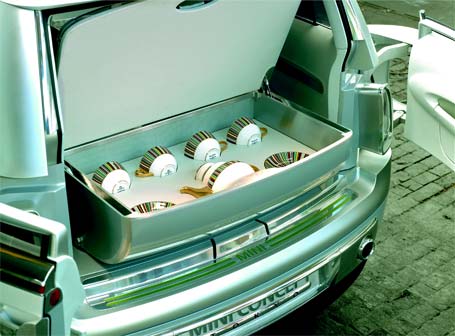 Cargo Box in the Luggage Compartment.
The loading area in MINI Concept Tokyo comes complete with an adjustable Cargo Box with various functions integrated in the floor of the car. Extending out to the rear, the cover on top of the Box also serves as a loading aid. And swivelling up when required, the transparent cover on the Cargo Box also serves as a partition between the passenger area and the loading compartment. 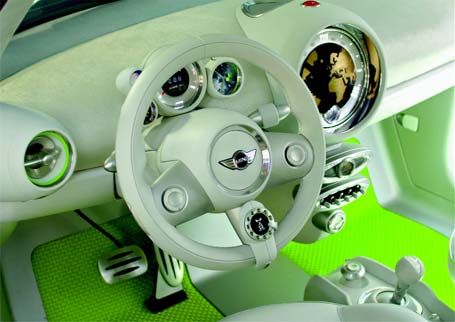 Floating Elements Characterising the Car”s Interior Design.
The Floating Elements Concept is full of surprises right from the start, keeping the floor of the car completely free and uncluttered and creating a generous and open impression. Only the central “island” forming the centre console covers the foot area, with the seats appearing to hover in space suspended from the centre support.

Satellite Silver Metallic Paint and Neoprene Contours.
In the light, MINI Concept Tokyo glistens in brilliant silver, while all sections not exposed to light from the beholder”s perspective stand out in a discreet shade of grey. The characteristic black side stripe along the sills and wheel cutouts, in turn, are made of soft, resilient neoprene. 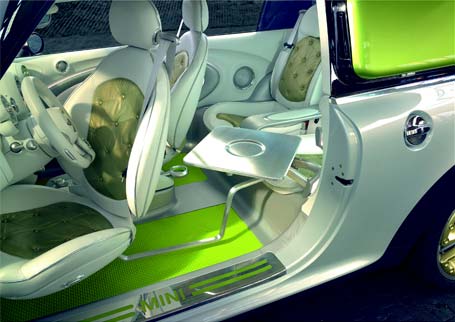 Leather, Brass Look and Aluminium as the Main Materials.
White leather inside the car enhances the impression of modern style, conveying a sophisticated ambience and accentuating the clear lines of MINI Concept Tokyo, with green surfaces and brass highlights such as the seat upholstery in Chesterfield design standing out elegantly. The general interior philosophy is to combine warm, high-quality leather with various surface structures further supplemented by cool-looking metallic surfaces. One example is the aluminium-coated glass-fibre structure along the inner door panels, a carbon-fibre look accentuating the footwells and harmonizing perfectly with woven nylon carpets underlining the sporting character of the car.

Forty-Five Years of the Mini Traveller.
The four-door Mini with an extra-large luggage compartment made its debut in September 1960 in the guise of the Austin Seven Countryman and, respectively, the Morris Mini Traveller. Indeed, the term “traveller” alone showed that this very special Mini Estate was targeted even back then at an active group of purchasers with genuine lifestyle. Total sales by 1982 amounted to more than 400,000 units, including a special version of the Mini Clubman launched in 1969.

For those who may not understand why MINI would be showing a seemingly radical concept, you first have to understand the Tokyo Auto Show and the Japanese automotive culture. There’s really nothing quite like it. Tokyo, more than any other autoshow, is where manufacturers can let the air down a bit and get freaky. This concept is just a another iteration on the Frankfurt Concept theme… except this time the MINI Design team accessorized the hell out of it.

Some of what you see here is truly a glimpse at the 2007 MINI. Then some of it is just radical concepts that will never see the light of day. And finally other parts are simply tongue and cheek design touches meant to be whimsical.

MINI Hits the Water at the Head of the Charles Regatta