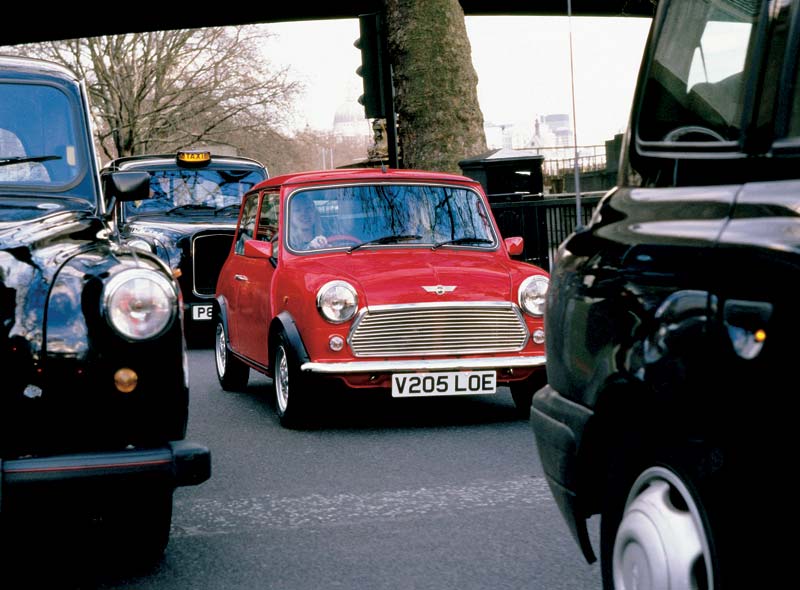 Here’s a blast from the past in the form of an official release that was presented to the international press as BMW was ceasing production of the classic Mini and putting the finishing touches on the R50.

(MINI Press) The Mini is as youthful as the day that Sir Alec Issigonis first sketched its simple lines on a restaurant table cloth. In four decades it has become an icon and is destined to live on as one of the great legends of the world motor industry. The modern motor car was born on 26 August 1959. On that day, BMC (British Motor Corporation) launched the Mini. BMC had been formed in 1952 by the merger of the Austin and Morris companies, so the Mini was originally launched in two versions – the Austin Seven (some times written “Se7en”) and the Morris Mini-Minor. According to the original publicity, the Austin was “The Incredible Austin Seven” while the Morris was “Wizardry on Wheels.”

Alec Issigonis (1906 – 1988, knighted in 1969) had been born in Smyrna in present day Turkey, the son of a Bavarian mother and a Greek father who became a nationalized Briton. After the war between Greece and Turkey where Greece lost her possessions in Asia Minor, young Alec and his by then widowed mother arrived in London in 1922. Here he pursued studies of engineering and eventually began his career in the motor industry. In 1936, he joined Morris Motors at Cowley. 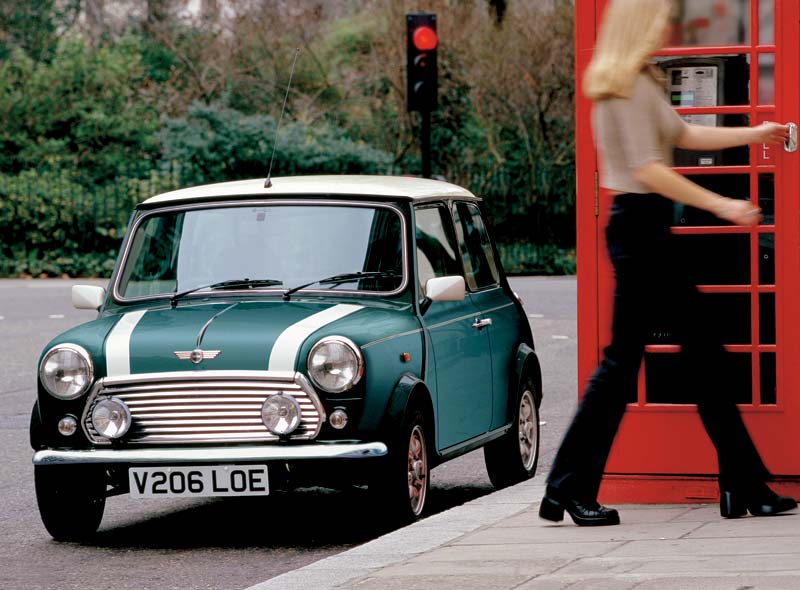 Under the impact of the Suez crisis in 1959 which for a brief period brought gasoline rationing back to Britain, Leonard Lord decided that BMC really needed a new small car. He asked Issigonis to design this and gave him largely a free hand only stipulating that it must use the existing A-series engine.

And so Issigonis, with a small team of assistants, began the design of the Mini. His vision was of the smallest possible car that would accommodate four adults and some luggage. Having established the basic dimensions for this package, he then looked at how the engine could be fitted into the car, which he saw as a box, little more than 10 feet by 4 feet by 4 feet. Before leaving Morris in 1952, he had already built a special Morris Minor with front-wheel drive and a transverse engine, and this idea was now applied to the new car. The masterstroke that made this engine installation possible was the idea of putting the gearbox in the sump of the engine. Other important space saving measures were the tiny 10 inch wheels, and the compact all independent suspension with rubber elements.

In the summer of 1958, Issigonis took Lord for a quick drive round the factory in one of the early prototypes. Lord was quickly convinced and told Issigonis to have the car in production within a year. And so it happened – the production lines at both Longbridge and Cowley, for Austin and Morris respectively, began to roll in the spring of 1959, in readiness for the August launch date.

Originally seen just as another small family car, the versatility and charm of the Mini made it a favorite with the jet setters of the swinging sixties. The car quickly became something else altogether – a fashion/lifestyle statement, an icon.

Many different variations were to follow the original saloon. The period 1960 to 1964 was especially fruitful, first with estate car and van versions, then a pick-up, and in 1961 the badge-engineered luxury versions of the Mini under the Wolseley Hornet and Riley Elf badges, featuring miniature versions of the classic radiator grilles of these brands, and also expanded trunks with increased luggage space. 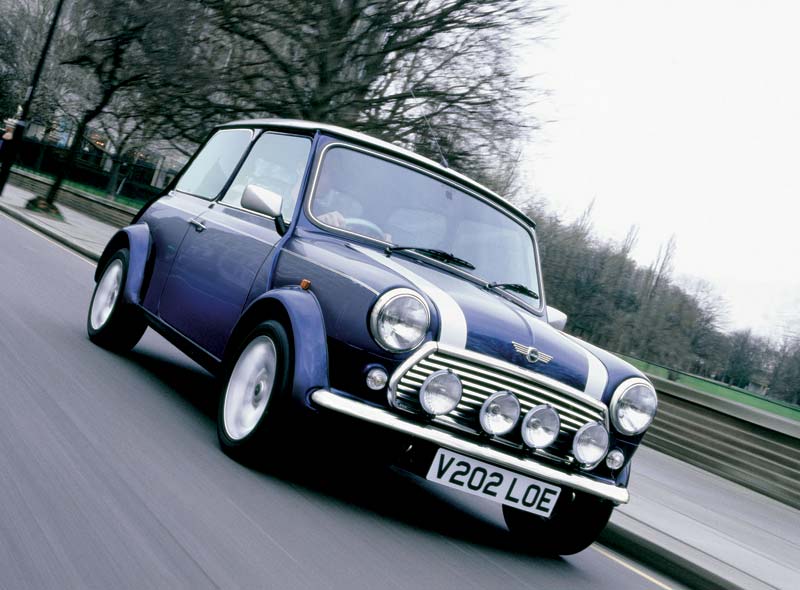 More importantly, 1961 saw the launch of the first Mini Cooper, a high-performance version developed jointly with the racing car constructor John Cooper. The standard Mini’s 848cc engine with 34bhp was replaced by a 997cc engine developing 55bhp, and the Cooper for the first time had front disc brakes.

In 1963 the Cooper was followed by the even more potent Mini Cooper S with a 1071cc engine and a top speed of close to 100mph. While the standard Mini and the Mini Cooper had already been used in rallying by BMC’s competitions department, the Mini Cooper S became an outstanding rally car. The car won the prestigious Monte Carlo Rally three times for BMC, in 1964, 1965 and 1967, apart from many other important victories, in the hands of famous drivers such as Paddy Hopkirk, Rauno Aaltonen, and Timo Makinen.

From 1964, the Mini Cooper S was fitted mostly with a new 1275cc version of the A-series engine while there was also a short lived 970cc version. The non S Mini Cooper received a 998cc engine which had already been introduced in the Wolseley and Riley models. At the other end of the Mini range, the utilitarian Mini Moke was introduced, a simple lightweight vehicle originally intended for military applications. Also in 1964, many Minis received the interconnected Hydrolastic gas/fluid suspension system.

By 1967, a small face lift was deemed to be in order, and the Mark II Mini range, introduced at the Motor Show, had new radiator grilles, bigger rear windows, and other cosmetic changes. The standard models now became available with the 998cc engine as an alternative to the 848cc size.
The new range for the first time lost the traditional Austin and Morris names – Mini now became established as a brand in its own right. Compared to the original models, improvements across the board included wind down windows in place of the original sliding door windows, and new concealed door hinges. The entire bodyshell was an additional model range featuring an alternative front end design, the Clubman saloon and estate car models, as well as a new 1275 GT model. Riley and Wolseley versions were however discontinued, and of the Mini Cooper models only the 1275cc S lived on briefly in a Mark III version before being discontinued in 1971. Van and pick-up models were continued, but the Mini Moke had been dropped from the UK line-up in 1968, although production continued in Australia, and later in Portugal.

The first millionth Mini was made in 1965, with the second millionth in 1969. The highest annual production figure of more than 318,000 Minis made worldwide was reached in 1971 and in 1972, the third millionth car was made, followed in 1976 by four million. After several abortive attempts at replacing the Mini, the BL company now had a new small car under development, to be launched as the Austin Mini Metro in 1980. The Clubman models, including the estate car and the 1275 GT, and the van and pick-up versions all disappeared. The 850 saloon also disappeared, leaving only the 1000 saloon to carry on.

A special anniversary model was also produced, becoming the first of many Mini-based limited editions. In 1986 the five millionth Mini came off the Longbridge production line.

In 1986, the BL company became the Rover Group, under Graham Day’s management, and Day personally authorized a new campaign to revitalize the Mini, with famous slogans such as “You never forget your first Mini” and “Minis have feelings too.” These efforts bore fruit particularly in export markets, notably in Japan where Mini sales rose from 1,000 cars in 1985 to a remarkable 12,000 in 1990, helping the Mini to achieve its best recent production figure of 46,000 cars.

By now the Mini had celebrated its 30th anniversary. In 1990 Rover, again with the enthusiastic help of John Cooper, brought back the Mini Cooper, first as a limited edition, soon after as a standard production model. The new Mini Cooper quickly became the best-selling Mini version. The 1275cc engine from the new Mini Cooper was eventually also fitted, in a less powerful form, to the standard Mini saloon, while in 1992 the first Rover produced Mini convertible appeared – after numerous aftermarket conversions over a period of 30 years. At Â£12,000 (approximately US$18,882) this was the most expensive Mini ever but still found a niche in the market.

In 1994, BMW acquired the Rover Group, thus adding the Land Rover, Rover, MG and Mini brands to the BMW Group portfolio. Investment by BMW into the Rover Group enabled the company to confirm, in 1996, that there would be an all-new Mini for the new millennium, to be built in the UK. There was also a new much-modified 1997 Mini range of two models, Mini and Mini Cooper, both sharing the same engine, a 1275cc A series with multi-point fuel injection and 63bhp. Both models cost Â£8995 (approximately US$14,153.60) on the road in the UK, but potential customers could easily spend a lot more on a Mini, choosing special equipment, accessories and paint and trim schemes from a wider options list. With these new models, Rover gave a clear signal that the Mini now and for the future would be positioned as a specialized more up-market type of small car, not as a mass-produced entry-level model. The image of the Mini brand was reinforced and sharpened with a new badge, and a special set of brand values defined as “energy, escapism, excitement, individuality and innovation”.

A glimpse of the future Mini, code named Project R50, was revealed the evening before the Frankfurt motorshow in September 1997. The new Mini is scheduled to launch in Europe and Asia in 2001. The company is currently researching the possibility of the Mini’s return to N. America.

Clearly, the legend that is Mini lives on.