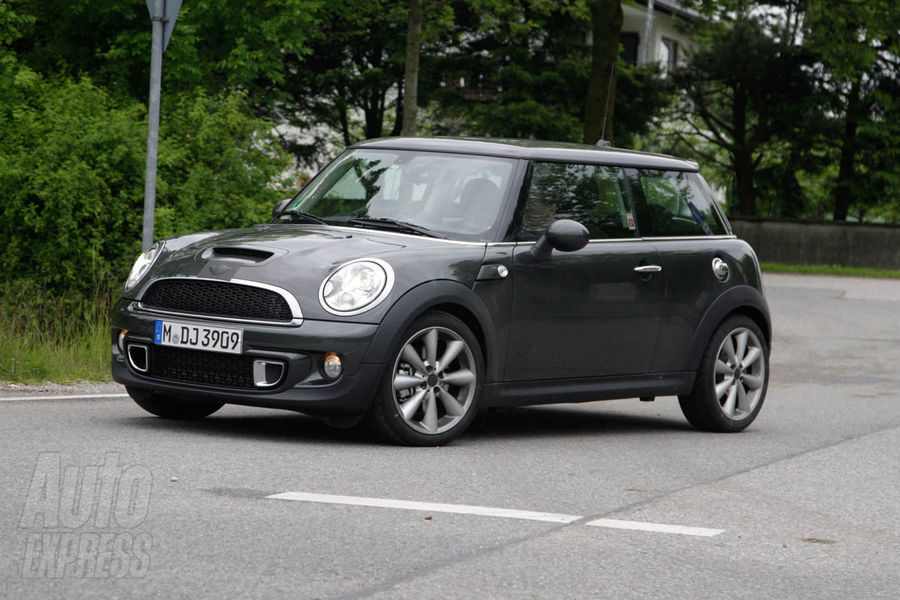 Here it is, the 2011 MCS refresh that will be applied to the R55, R56 and R57 models. Autoexpress has the first photos of what can only be described as our best look yet at the 2011 MINI. No surprises really. The front clearly shows the 2011 MCS with the new (fully functioning) brake ducts finished in chrome as part of the updated “Chrome Line” option. Also seen here for the first time are the wheels that will be replacing the less than loved Crown spokes. Going back to a cleaner more S-lite look, the new 17″ wheels (standard on cars with the sport package in the US and Chili pack in the UK) reportedly weigh less than the s-lites while having a more rounded appearance.

The headlights are updated and feature a subtly different design that allows for easier parts swapping when MINI wants to offer black headlights as an option. We don’t know how that will manifest itself but we do expect to see more of them.

Around back the new LED tail lamps are still disguised but the new rear bumper is fully exposes. Again as part of the exterior chrome option the rear foglight surrounds have been redesigned.

So that’s it. The 2011 MCS. The upgrades are slightly more subtle than the R53 refresh due to BMW being a bit more conservative with costs. A natural result of most of this planning and design coming in the depths of the recent worldwide recession. However in our eyes these are solid (and functional with the MCS brake ducts) improvements that we prefer. However we’ll have ours without the chrome line option please.

Look for more information and official photos in the coming weeks. You can see more photos at Autoexpress.

We covered the details of the engine upgrades last week but if you missed it you can find the article here. For more information on MINI’s refresh see our previous stories on the exterior and interior changes.

Want to know about the 2011 JCWs? Check back tomorrow Thursday.