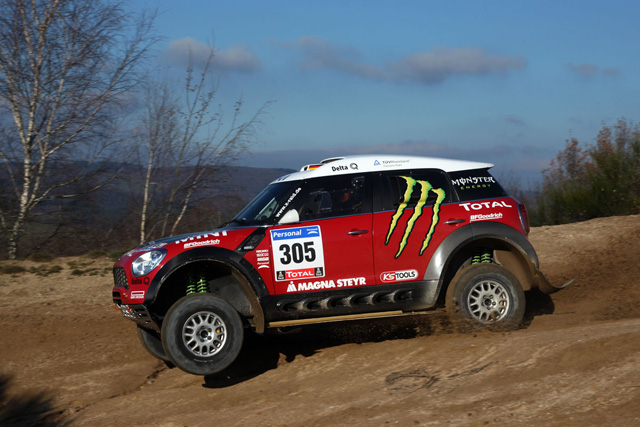 We’ve received word that the MINI Dakar race team is safe and sound in South America ready for the big race. Best of luck to them and we can’t wait to see that Countryman in action.

[Press Release] All members of the Monster Energy X-raid rally team has safely arrived in Buenos Aires to begin final preparations for the official start of the 33rd Personal Dakar Argentina-Chile on New Yearâ€™s Day.

Six BMW X3CCs, the brand new Mini All4 Racing and the teamâ€™s fleet of race trucks, service trucks and support vehicles have been removed from the dock area in Buenos Aires and are being prepared by Sven Quandtâ€™s army of mechanics and engineers.

Guerlain Chicherit and co-driver Michel PÃ©rin managed to carry out a short pre-event test in the Mini All4 Racing about 50km from Buenos Aires at a nearby motorcross circuit on Wednesday afternoon. Chicheritâ€™s Mini has been developed in record time and the Frenchman will be hoping to improve on the fifth position he obtained with a BMW X3CC last year.

The entire X-raid team will attend pre-rally administration and scrutineering formalities at La Rural conference centre in Buenos Aires on Friday morning, before the competition cars are placed in a Parc Ferme area. Team members will then attend a New Yearâ€™s Eve dinner in the fashionable Puerto Madero area of the city to celebrate the start of the New Year.

One hundred and fifty-six cars, 183 bikes, 33 quads, 68 trucks and competitors from 51 nations are expected to finalise pre-rally formalities over the next two days before the official start on New Yearâ€™s Day.

MINI Prepares for the 2015 Dakar Rally