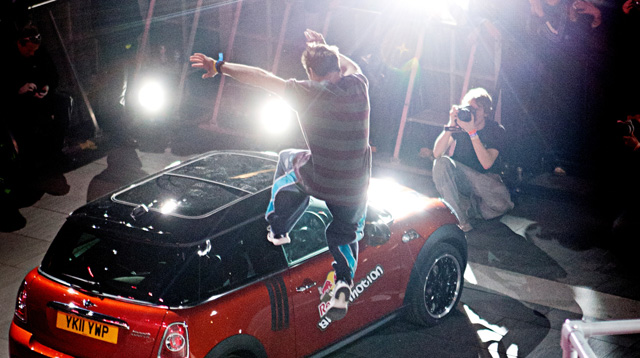 MINI and Red Bull have teamed up yet again to bring the world another unconventional sports series. This time, it’s free-running and parcour. Competitors run a street course one and are judged on flow, athleticism and the sheer spectacle of their maneuvers. A MINI is even integrated into the course. As part of the judging, the MINI Sickest Trick Award is presented to the athlete with the most spectacular feat of foot. More details after the break.

[Official Release] First London, now the world: with backing from MINI, the Red Bull Art of Motion moves on from its debut in the English capital to five more cities that are set to host some unique free-running events this year. The worldâ€™s top free-runners will pit their skills against each other in a publicly staged contest at the following venues: Yokohama (30 July 2011), Sao Paulo (11 August 2011), Detroit (August 2011), Santorini (September 2011) and Green Island Kuwait (October 2011). At each event MINI will present the athlete who has performed the most spectacular trick with the MINI Sickest Trick Award.

Free-running and parcour combines creativity and acrobatics into a compelling art of movement in urban spaces. Underpinning this discipline are the discovery of new and unconventional paths and the thrill of motion. Based on the MINI philosophy of â€œCreative Use of Spaceâ€, the athletes make inventive use of the features of the course â€“ in which a MINI is also integrated â€“ in order to execute special stunts and acrobatic moves. A panel of judges rates the presentation of each contestant based on criteria such as flow of movement, creativity and technical level. During the event the judges will also be looking out for the most spectacular performance of the athletes.

Red Bull Art of Motion is not the first collaboration between MINI and Red Bull: the carmaker is already a partner of Red Bull Crashed Ice, an unconventional winter sports discipline in which groups of four athletes on ice skates hurtle down a five-metre-wide ice cross downhill track. 2011 also saw MINI presenting its first trophy in this discipline: the MINI Rookie Award for the fastest newcomer on the ice track.