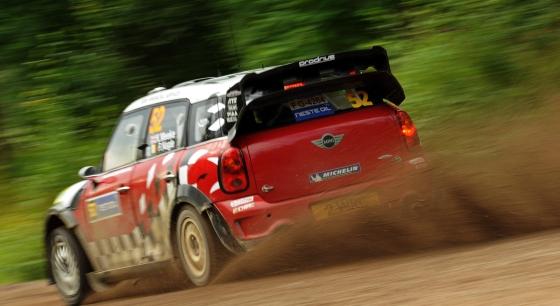 MINI continues it’s learning process this weekend at the Rally of Finland. Kris Meeke finished in an impressive 5th with Dani Sordo in 14th for the day. Overall however Sordo is in 7th with Meeke (who had a tough day 1) is in 8th.

(Via MINIMotorsport) Dave Wilcock, Technical Director: “Today we are particularly pleased with Kris, who is driving very well. His plan is just to learn the roads, get through the rally and go home with experience. He is over achieving above our expectations, and driving within himself and taking no risks. We had a small problem when his car would not start, and so he booked in two minutes late. It seems to have cured itself, but then problems are never isolated, so we need to have a good look at that. Dani is driving well, but nobody knows these stages from today. He is happy with the car, the tyre wear seems to be good, but on the stages he knows tomorrow we are expecting him to go well and up the performance to show what the car can do.”

Dani Sordo: “It was not bad, but we are waiting for a little bit more – not from the car but from me to be a little bit faster and more confident. It is always very difficult here in Finland, and then we had all the new stages today. We also made a mistake on the last stage and had a spin after missing the braking on the first junction. However, I had a lot of fun and did well in stage ten where two cars start side by side and so have a race to the finish.”

Kris Meeke: “It has been going pretty well. I probably have not been trying much harder than yesterday, but the more you get back into rally speed the more you get a feel for these roads and the more it just comes to you. On the long stages we are about half a second a kilometer behind the likes of Sebastien Loeb and Sebastien Ogier, which I think in this territory is pretty good. It shows we still have a bit of work to do, with both the driver and the car. I can’t complain for my first full rally back in ten months, and it is nice to have got really good mileage in over the last couple of days and we have another day tomorrow.”

Special Stage 11: Grand finale to day two of the Rally Finland. Both Dani and Kris have found their rhythm and, after a long break since Sardinia, have regained a sense of how it feels to drive under competitive conditions. Dani (14th place on the special stage) does make one small mistake when breaking upon entering a corner, which ultimately sees him drop a place in the overall classification. In the meantime, Kris is fifth on Friday’s final stage to end the day eighth overall. The pair goes into the third and final day of the Rally Finland invigorated and full of confidence. Another eleven special stages are scheduled for Saturday.

Special Stage 10: The shortest special stage of the day, at just two kilometres in length. Dani takes the ‘sprint’ stage literally and clocks the third fastest time on this special stage. Kris is eighth.

Special Stage 9: The drivers return to the longest special stage of the day for the second time. The times show just how important it is to know the course. Dani is 25.1 seconds faster than his first attempt, while Kris is 21.6 seconds quicker. Both drivers maintain their overall positions: Dani is in sixth place with Kris in eighth.

Special Stage 8: Kris is once again faster than Dani, who has to take his foot off the gas a bit as he passes Ketomaa, who is struggling with technical problems. Kris is finding his form. “I am getting into a better rhythm. The car is working really well. There is more to come from me.” Kris has problems starting his car at the beginning of the special stage, resulting in his checking in late – a fact he takes in his stride. He will simply keep the engine of the MINI WRC running until the end of the day, then the technicians can go to work.

Special Stage 7: Kris is quick again after the service break – faster than Dani, who until this point had largely had his nose in front. “I think we could be a bit faster,” says Dani, who is eleventh fastest over this special stage. Kris is 2.5 seconds quicker in eighth place. Despite his pace, Kris remains cautious: “I’m not taking any crazy risks and my driving is improving all the time, as are my results.”

Special Stage 6: The morning draws to a close with the longest special stage of the second day – the 29.9-kilometre “Hyväneula” – before the remote service. Kris continues where he left off on Special Stage 5 and is one second faster than Dani. Dani and Kris will start the second part of the day, in which five special stages await the drivers, from seventh and eighth places respectively.

Special Stage 5: Kris’s disgust with his performance on the fourth special stages really spurs him on. The self-proclaimed “grandma” goes airborne, ending Special Stage 5 in sixth place, 1.4 seconds faster than Dani who finishes in eighth place. Kris moves up a position in the overall classification and is now eighth, one place behind Dani.

Special Stage 4: Day two of the Rally Finland gets off to a tough start with the 20.35-kilometre fourth special stage, which many experts rated as the most difficult special stage on the rally after the Recce. Dani finishes in tenth place and is happy with his performance. “That was a nice stage,” says Dani. Despite this he still drops a place to seventh place overall. Kris is less happy. “I drove like my gran,” says Kris. His performance is still good enough for 13th place on this special stage, however.

MINI USA Sales Down Only 3.8% For June