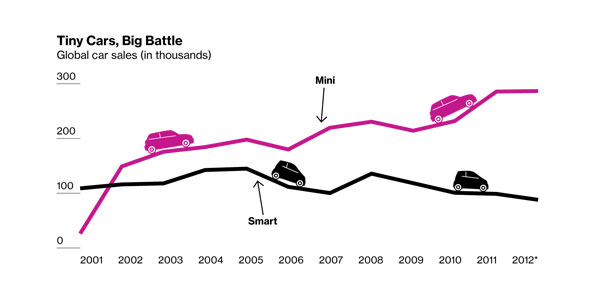 2011 was a banner year for BMW and MINI. MINI sales were up 22%, making for its strongest sales year ever. With sales, came profits. Smart on the other hand, not so much. Recently Businessweek did a comparison piece contrasting MINI’s success against the dismal, -$100M loser that is the Smart car. Even though the Smart debuted several years earlier, and at a much lower price point, the MINI has managed to out-sell the Smart three-to-one. In their analysis, Businessweek sites growing model diversification as a key part of MINI’s success over the Smart.

When Daimler (DAI:GR) introduced its tiny Smart two-seater in 1998, it was convinced that a high-end micro-car for crowded urban areas was an idea whose time had come. It had—just not for Daimler. Three years later, BMW (BMW:GR) rolled out its own diminutive model, an update of Britain’s vintage Mini, which soon surpassed the Smart and evolved into a family of roomier small vehicles. In addition to losing control of an urban car market it helped create, Smart has racked up more than €4 billion ($5.3 billion) in losses, according to estimates by Sanford C. Bernstein analyst Max Warburton. “Smart had the wrong strategy,” says Ferdinand Dudenhoeffer, director of the Center for Automotive Research at Germany’s University of Duisburg-Essen. “The niche for two-seaters isn’t that big. They lost a lot of time while Mini systematically expanded its model portfolio.”

With the MINI family set to grow to ten models in the next few years, their strategy of model diversity seems to be paying off big. MINI remains the only brand focused on being premium and small, while competitors continue to dabble in that combination hit and miss. MINI’s head start in the segment will continue to be a difficult lead for their competition to overcome. That, without even going into the character of the cars, which in my opinion, is the key factor of MINI’s winning formula.

The MINI One D Gets an Upgrade