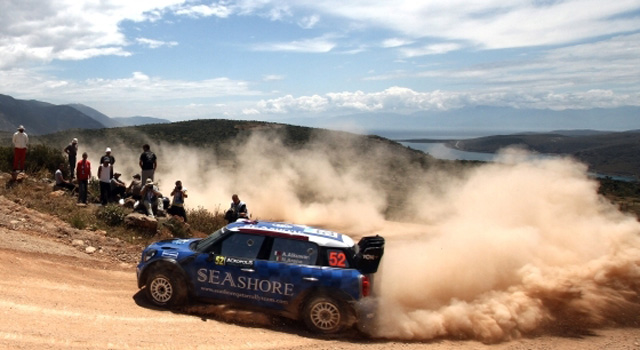 [Official Release via MINI Motorsport] It became clear three stages from the end of the Rally Greece that a party would be breaking out at Abdulaziz Al-Kuwari’s team after news was confirmed that Andreas Mikkelsen, then in tenth place, had retired with a damaged car. Naturally no one in the Seashore Qatar Rally Team would wish that on an opponent, certainly not on an event as demanding as the Rally Greece. Still, hand-on-heart, a place in the top tenth, which is precisely what Mikkelsen’s retirement meant for Abdulaziz, would have left nobody in the field cold.

“A great result. I am very happy,” beamed an overjoyed Abdulaziz after the end of the season’s sixth WRC round, an event in which Sébastien Loeb again went unbeaten. Not even a punctured tyre two stages from the end could stop the world champion. His two-minute cushion over Mikko Hirvonen had served as relaxant for Loeb, although his lead was to shrink to 40 seconds. Still, over the final two stages it was business as usual for Loeb, who sailed to victory over Hirvonen and Jari-Matti Latvala in second and third places overall respectively.

The excursion to the Rally Greece by the Seashore Qatar Rally Team certainly paid off. In January Abdulaziz won the Qatar International Rally – still in a MINI John Cooper Works S2000. For the Rally Greece he switched to the MINI John Cooper Works WRC, and was able to feel immediately comfortable with his newfound friend, enabling Abdulaziz to complete all three rally days without problems worth mentioning. With two successful events in the bag, the Seashore Qatar Rally Team is currently planning the rest of its season.

Armindo Araujo and Paulo Nobre already have their next event booked, namely the Rally New Zealand, which the two MINI WRC drivers will contest between 22 and 24 June. In Greece Armindo narrowly missed a points placing. Retirement on Saturday, when difficult stages followed by heavy rain took their toll on cars and teams, had thrown Armindo down the order. To that point he had been the lead MINI WRC driver. On Sunday Armindo stuck to his resolution of bringing his MINI WRC safely to the finish.