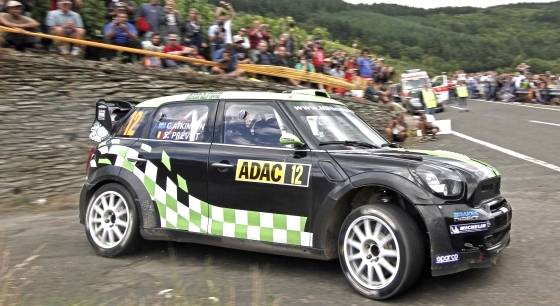 New car, new team, renewed confidence for the final four rallies of the current WRC season: That is the synopsis of the WRC Team MINI Portugal following Chris Atkinson’s first appearance in the MINI John Cooper Works WRC. Despite only having switched to the WRC Team MINI Portugal shortly before the Rally Deutschland, the Australian nicknamed “Atko” immediately felt visibly comfortable with the MINI WRC. Although he had not tested meaningfully prior to the event, Atko mastered all 15 special stages of the Rally Deutschland with his controlled, consistent driving style.

“I tried to prevent doing anything stupid,” Atko constantly repeated during the German rally. “It is all about getting a feel for the car.” When the going got even tougher on Saturday during the Rally Deutschland’s most difficult stage, the feared, so-called “Panzerplatte” which pushed various drivers beyond their limits, Atko kept a cool head to move into the fifth place overall he was to impressively defend against rising star Sébastien Ogier all the way to finish.

Atko can be well satisfied after posting the best result of all MINI WRC drivers on the Rally Deutschland, on which world champion Sébastien Loeb once again proved invincible. “It was extremely valuable experience. I desperately wanted to make it to the finish in order to amass as much experience with the MINI WRC as possible,” Atko said after the event. His next event with the MINI WRC will be the Rally Great Britain (13-16 September), a three-week wait. Three further events await Atko this season – during which time he will feel even more comfortable with the MINI WRC. Thus MINI fans have even more to look forward to.

Dani Sordo looking forward to Rallye France.
The same applies to Dani Sordo’s next outing, the Rally France (4-7 October). Having failed in his quest to score a second successive podium in Germany, Dani will head to France determined to prove his talent. The event is the next WRC round to be contested on asphalt, a surface on which both Dani and the MINI WRC feel at home. Following his third place on last year’s Rally Deutschland, he aimed to emulate the feat this year, but was forced to give up all hope of the podium on Saturday after first suffering tyre damage, then colliding with a boundary stone, on the infamous “Panzerplatte”. The incidents dropped him from third overall to twelfth.

Dani’s disappointment at missing the podium was palpable. However, those within the Prodrive WRC Team who know the Spaniard, know that Dani quickly forgets the past and concentrates on the future. Dani, co-driver Carlos del Barrio and the MINI WRC proved their mettle in Germany. On eight of the 15 stages he recorded top-five times, including setting three third-fastest times, a second place and a stage win. Following the Power Stage ninth place overall was his. “I had planned more for Germany,” Dani said after the event. “However, incidents such as these on Saturday happen. I am now looking forward to France.” So are MINI fans.