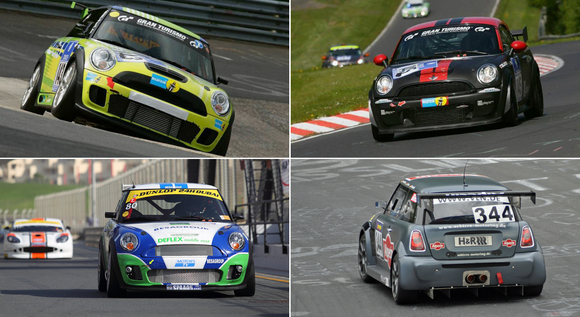 [Official Release] MINI is represented by a strong contingent of five cars at this year’s 24-hour race in Barcelona. Great things are expected of all four teams on the endurance circuit.

Class victory, class victory, class victory: all four MINI teams lining up at this year’s endurance event – a total of five cars – have made it their mission to send the fastest car in their category into action at the 24-hour race in Barcelona from 7th to 9th September. They face tough opposition in the Catalonian capital, with 18 driving crews starting out in the A2 class at the demanding “Circuit de Catalunya”, which for many years has regularly hosted Formula One races. The five MINI crews will have to show real stamina. They cannot afford to let the many Renault Clios in their class out of their sights, particularly as they are equipped with sequential gearboxes to make their drivers’ lives easier.

s.i.g. Motorsport lines up with two cars that could not be more different – from a visual point of view, at least. Team principal Lothar Sausemuth is sending a black and a white MINI John Cooper Works Endurance Coupé (numbers 43 and 44) into the fray. “As far as the performance is concerned, they are both completely identical. Only a few minor details are different,” said Sausemuth. His team has completely reassembled the white MINI Coupé especially for its outing in Barcelona, while the black version has already seen action at the Nürburgring 24 Hours back in May.

Fewer stops to save time.
Rainer Partl is always happy to recall the classic in the Eifel region of Germany. The Team Partl Motorsport boss’s MINI was the only one to successfully complete the race. Partl now lines up with exactly the same successful MINI in Spain. “We have an impressive overall concept,” said Partl. “Some others may set faster lap times, but we are able to counter that with fewer stoppages than the opposition.” Partl hopes a well thought out service plan, which also resulted in success at the Nürburgring, will put his team’s nose in front again this time.

The Besaplast Racing Team also knows how sweet success can taste. Its goal for Barcelona is the class victory. Back in January of this year, the Besaplast Racing Team demonstrated just what it is capable of with its endurance car, which is based on a MINI John Cooper Works Challenge: at the 24-hour race in Dubai, the team achieved precisely what it has set its sights on in Barcelona: a class victory.

Defying more powerful cars in a MINI.
The quintet of MINI cars is completed by SCHIRRA motoring. The team is making its debut in Barcelona, but brings with it a wealth of experience on the endurance circuit. SCHIRRA motoring has been a regular at the Nürburgring 24 Hours and in the German VLN Endurance Championship for years now. The goal for Barcelona? “To finish,” says Team Principal Joachim Schirra, “and to win the class.” Schirra sees proving that the MINI can defeat cars with a greater engine capacity as the biggest challenge. “As far as the basic speed is concerned, our MINI is one of the favourites,” says Schirra.

One factor that must not be underestimated in Barcelona is the temperature. Unlike last year, when the race started in rain and unusually cool temperatures, 27 degrees Celsius is predicted for the upcoming weekend. In order to produce top performances, the drivers must be super fit, keep a cool head and have an eye on the temperature of their engines. It is set to be a thrilling 24-hour race in Barcelona in every regard in when the starting lights switch to green at 12:00 local time (CEST) this Saturday.

Double Podium for Pombo at Sonoma