MINI USA February monthly sales dropped for every model but the Clubman when compared to the same month in 2015. And in February last year, only two Clubmans (Clubmen?) were sold due to the model phase out, so even that bit of good news is somewhat of a statistical anomaly. Right now, MINI is only a four model car company for all intents and purposes. The convertible can’t come fast enough! But convertables are notoriously poor winter sellers, so even if MINI had managed to move a couple hundred, the brand still would have been down.

And this month, most of the Light Vehicle industry is pretty happy, with February year-on-year sales growth of 6.8%: lower gas prices, a good President’s Day weekend as well as improved consumer outlook are all contributing to a record-setting annual sales forecast. To rub salt into the wound, the decline in MINI sales is the largest of any brand in Matt’s MINI Index. The MMI for February declined 5.8% This isn’t entirely surprising as US car buying tendencies shift to larger vehicles (SUVs and full sized Pickups) when gas prices are low. But the decline for MINI is more than Smart USA, Fiat and even VW, a company still plagued by their emissions scandal as well as their ham-fisted responses. 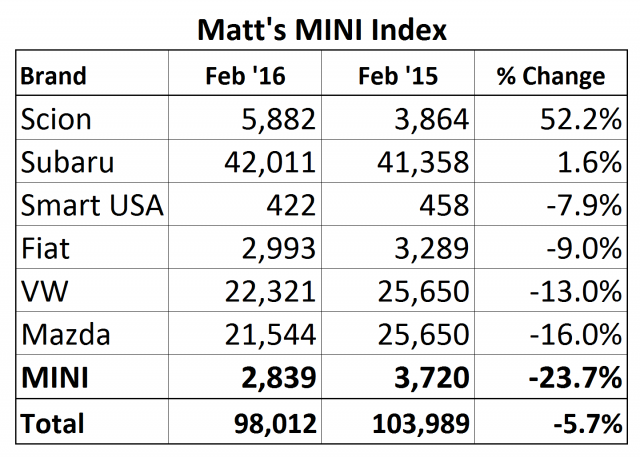 Here at MotoringFile, these numbers are a bit surprising. The new Clubman is getting very good reviews. And both the 2-door and 4-door hardtops are very capable cars, full of the newest cabin technology. But it’s also obvious that the Countryman is well past it’s sell-by date and drastically needs it’s refresh. Used vehicle sales were up for the brand though. Needless to say, there is little positive to say about these numbers, and that is reflected in the very brief mentions of MINI in the corporate press release that announced this months numbers. We are hoping that this is an anomalous month, and that next month looks better. What say you, MotoringFile readers? Sound off in the comments!

MINI Brand Sales
For February, MINI USA reports 2,839 automobiles sold, a decrease of 23.7 percent from the 3,720 sold in the same month a year ago.  Year-to-date, MINI USA sales are 6,077 vehicles, a 12.5 percent decrease from the same period last year.

Worldwide MINI Sales Up 19.4% For June

MINI Expands it’s All Wheel Drive Range with the Paceman