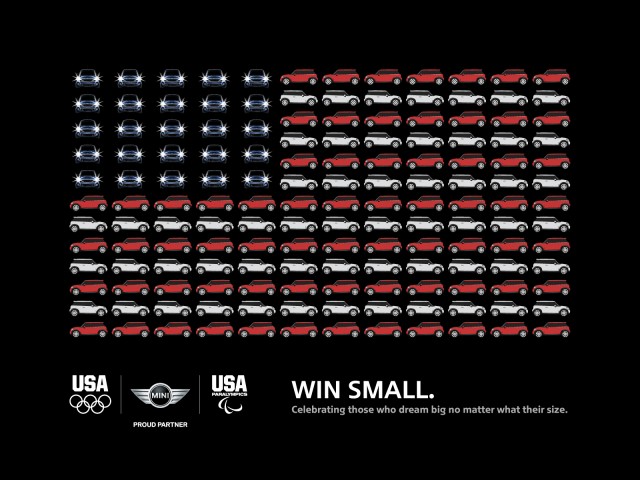 [Official Release] To celebrate Team USA at the 2012 Olympic and Paralympic Games, MINI USA is launching its new marketing campaign, “Win Small.” People remember the surprise heroes… The unexpected underdogs who are born out of the Games. It’s about their journey to the top. MINI shares a similar story.

MINI USA is an official sponsor of the US Olympic and Paralympic teams, and to help engage fans across the country, MINI USA’s campaign will include TV, online and mobile advertising, dealer assets and a social media component. A Facebook tab has been created that encourages fans to submit their own story of overcoming odds. A gallery of these stories will be created along with a feed of top #WinSmall tweets.

“MINI USA’s partnership with Team USA had a fantastic kickoff earlier this month with MINI TAKES THE STATES, where the US Paralympic Team was selected as the rally’s charitable partner. We are excited about getting people more engaged in everything the Olympic and Paralympic Games represent,” said Tom Salkowsky, Manager of MINI USA Marketing. “Our Win Small content underscores MINI’s size but also our mindset of being the feisty underdog overcoming the odds and skeptics. It is something MINI and our owners are familiar with and what better way to celebrate that than cheering on small.”

The “Win Small” campaign launched online and on mobile devices July 17, 2012. The 30-second national TV spots will be aired throughout the Olympic Games beginning on July 27, 2012. A longer 60-second version will run online and in dealer showrooms.