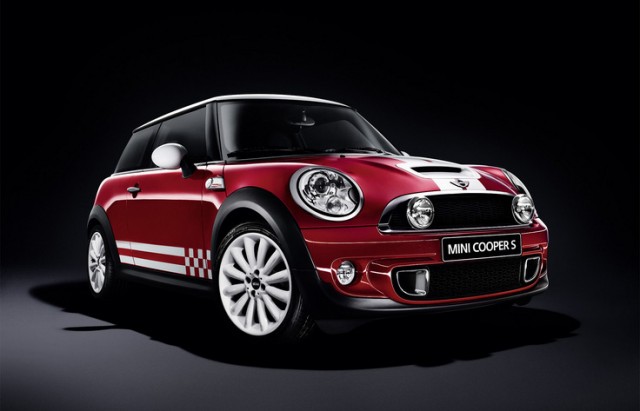 In the past two years, MINI has come back to racing in a big way. With several WRC podium finishes last year and a dominating win of this year’s Dakar Rally, MINI has made its re-entry into motorsports in a big way. I say re-entry because MINI made a name for itself in Rally racing nearly 50 years ago when it took the Monte Carlo not once, not twice, but three times. To MINI fans it’s a familiar story and along with it is a familiar name: Rauno Aaltonen — the man behind the wheel.

Now MINI is honoring Rauno with a special edition MINI Hardtop. Clad exclusively in Chili Red with white accents throughout, the car pays homage to the original Monte Carlo Mini contender. A pair of white racing stripes travel up the bonnet and down the boot lid, while white and checkered side stripes and rally-inspired driving lights come as standard round out the look. There’s even a white scoop (Cooper S) and a set of 17″ “Infinity Stream Spoke” wheels. Inside you’ll find red accent rings in the steering wheel and speedo, which also features Rauno’s signature.

I must say, it just looks terrific. Harkening back to MINI’s first special edition, the MC40, these classic colors and nice touches really make this special edition stand out from models MINI has done in the past. Rather than being fashion oriented, this car is paying homage to MINI’s racing history and honoring a man who to this day is one of MINI’s most interesting and cheerful ambassadors. I’ve had the great privilege of connecting with Rauno at several MINI events and was lucky enough to get some seat time with him in both the MINI Coupe and a classic Mini Cooper S. So I must admit, this car is genuinely tempting. No word yet on if it will come to the US or not. Like most of MINI’s special editions it’s unlikely. However, for anyone who is lucky enough to get their hand on one, there’s a special treat baked into the price of the car: a day rally driving instruction at the Aaltonen ice racing school.

So cheers, Rauno! It’s a terrific-looking car. Thanks for lending it your name and thanks for all that you’ve done for Mini, MINI and fans alike.

P.S. My double-clutching has gotten much, much better. Thanks, Rauno.

Drive Your MINI at Laguna Seca

MINIs Take to the Track at Lime Rock