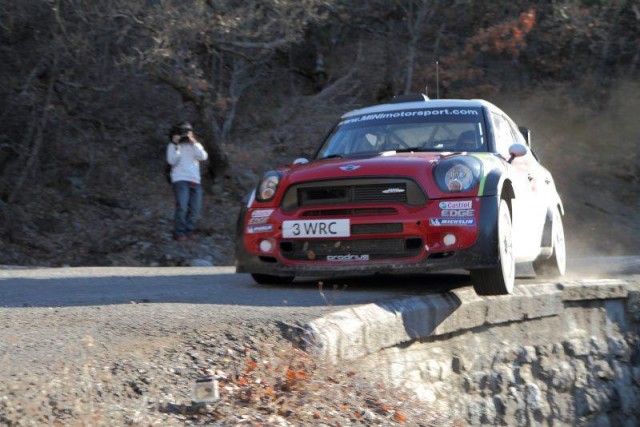 [Via MINI Motorsports] Dani Sordo wins his duel with Petter Solberg in literally the last minute. In the final stage of day two of the Rally Monte Carlo Dani manages to come out on top.

Special Stage 10: Wow, with a top finish at precisely the right time Dani Sordo, driving the number 37 MINI John Cooper Works WRC, manages to successfully defend second place. Having become embroiled in a thrilling duel with Solberg, Dani was twice forced to cede second place overall, yet managed to retake the place each time. On the final stage of the day his 6,1 second advantage proved decisive, enabling him to again move ahead of Solberg. “It was a good afternoon,” says Dani. “But I believe we can still up our performance.” Dani starts the third Monte day with a shortfall of 1:37,2 minutes on leader Sébastien Loeb.

Simultaneously Pierre Campana in the number 52 MINI WRC recorded constantly fast times to secure his place in the top ten, moving into seventh after the retirement of Sébastien Ogier. The two privateer MINI WRC drivers, Armindo Araujo and Paulo Nobre, occupy places eleven and 24 respectively after the second Monte day.

Special Stage 9: The Sordo-Solberg duel continues going back and forth. On the penultimate stage of the day Solberg eases ahead – by just 1,8 seconds. Thus the destiny of second place overall remains wide open. Just 2,4 seconds separate the two protagonists as they head for the final stage of the day.

Special Stage 8: Dani takes the restart after the lunch break in a fighting mood, immediately setting the fastest time. It may be just 0,2 seconds faster than Loeb’s best effort, but fastest time is just that. Thus Dani narrows to within 1,5 seconds of Solberg as Pierre posts the sixth-fastest time.

Special Stage 7: The third stage of the day, and again Dani Sordo and Petter Solberg swap positions. After retaking second place on the previous stage, Dani is forced to cede to Solberg shortly before the service halt. However, their head-to-head race is far from decided, with just 3,7 seconds separating them. The three morning stages will be repeated after the break.

“My times are okay,” says Dani, “but I can still do better. I am pushing the car hard, but the road conditions are not easy.” Unlike the opening day, there is almost no ice or snow on the road, although there are numerous slippery, moist patches, which provide challenges for the team. No change to weather conditions is forecast for the afternoon.

Special Stage 6: Dani and Carlos fly through the stage, but are forced to wait a while for their stage times after a technical issue. However, their patience is rewarded, for Dani has taken 11 seconds off Solberg to reclaim second place overall by 0,3 seconds from Solberg.

Shortly thereafter Pierre posts tenth fastest to maintain eighth ahead of the last stage before the service halt. It is 22,16 kilometre long.

Special Stage 5: The start of the second Monte day sees the MINI WRC Team fit soft tyres for the wet road conditions, for no ice is forecast. Dani records the third-fastest time, but is forced to yield to Petter Solberg, who is 2,9 seconds faster, and thus occupies second place from Dani by just 1,9 seconds.